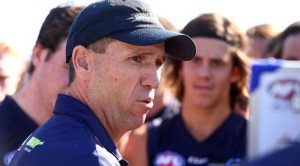 This weekend’s Round 15 TAC Cup clash between the Bendigo Pioneers and the North Ballarat Rebels is firming as a make or break game for the Pioneers as they vie to remain in finals contention. Kate Withers preview the clash.

Last time the sides faced off in Round 5, the Rebels were relentless. A 10-goal third quarter put the game well beyond Bendigo’s reach as North Ballarat marched to a 70-point win.

Bendigo coach Brett Henderson says the Pioneers can’t afford any lapses in defensive pressure or focus against the Rebels this time around.

“We have to make sure we defend when we have to, because we didn’t do that last time,” Henderson said.

“There was a sense of satisfaction at half time in Round 5, and then structurally we fell apart through a lack of communication and understanding of how to set up.”

Sitting in ninth position at 4 wins and 10 losses for the season, Bendigo opened up the race for eighth spot last week with a 21-point win over Oakleigh at Warrawee Park.

Paying plaudits to the Pioneers’ for their win over the Chargers, North Ballarat coach Gerard FitzGerald says his side of wary of its Round 15 opposition.

“To go to Melbourne and beat a really good team that’s been successful in the comp for a long time says to me that there’s plenty of talent, belief and confidence in the Bendigo side,” said FitzGerald.

Enjoying a purple patch of its own, North Ballarat has claimed scalps against three top eight sides in recent weeks and rests two games clear of the Calder Cannons in fifth position.

Not satisfied with last week’s 35-point victory over the Cannons, FitzGerald says the win also exposed holes in the Rebels’ structures.

“We were challenged last week, and I reviewed the game with the boys and we saw some errors in our systems that need to be rectified.

“We’ve been concentrating on developing a style of play that we think can stand up under pressure, and I’ve seen an improvement in our organised structures.”

Attesting to the Rebels’ player riches, Henderson says North Ballarat are sure to prove troublesome across all lines this weekend.

“Their midfield is pretty strong,” said Henderson. “ Hugh McCluggage and Willem Drew are quality players, and Jarrod Berry is instrumental in setting them up, and Shannon Beks up forward as well. So those players are at the forefront of our plan.”

McCluggage, Drew and Berry are three of five North Ballarat players invited to attend the 2016 NAB AFL Draft Combine later this year, along with defenders Cedric Cox and Tom Williamson.

“I haven’t seen either of them play a bad game, they’re both terrific kids and they deserve every opportunity,” said Henderson.

“They’re two of our hardest workers and it’s no coincidence that the hard workers get somewhere, and those two are at the top of tree as far as that goes.”

Ahead of this weekend’s season defining game against an in form Rebels outfit, Henderson believes the same hard work will go a long way to ensuring Bendigo secures a 2016 finals berth.

“Our plan is to have constant pressure around the football and close in on the opposition when they’ve got it.

“I think we rebound really well out of our defensive fifty, so if we get both those aspects right then I think we’ll be right in the game.”

Bendigo takes on North Ballarat this Sunday, July 31 at Queen Elizabeth Oval in Bendigo from 1pm.

In other Round 15 games:

RAMS Arena will see the top 4 battle between fourth placed Sandringham Dragons and third placed Murray Bushrangers. It will be the first of a double-header Saturday, with Calder Cannons and Gippsland power to follow.

Eastern Ranges and Geelong Falcons will renew acquaintances at Box Hill City Oval, with nothing separating the two teams the last time they met at the ground in 2015.

Oakleigh Chargers will look to retain its one game gap inside the top eight as they face Northern Knights and Dandenong Stingrays will aim for top spot when they face Western Jets.