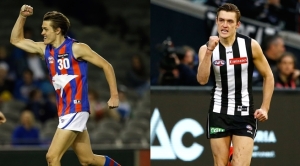 Moore, 20, kicked 3.2 from eight disposals and six marks (five contested) in just 34 per cent of game time against the Eagles, before being forced from the game in the second quarter due to a hamstring injury.

The Kew Comets junior was selected by the Magpies with pick no.9 in the 2014 NAB AFL Draft under the father-son rule (Darcy’s father Peter Moore played 249 games for Collingwood from 1974-87, winning two Brownlow Medals and captaining the club for two seasons).

Earlier that year, Moore skippered Oakleigh to the TAC Cup premiership, was selected in the TAC Cup Team of the Year and made the U18 All Australian team following the NAB AFL U18 Championships.

“Darcy has very quickly accepted the responsibility of being a young leader in this team,” Buckley said. “His commitment to the contest is unquestioned and in a short space of time has earned his teammates’ trust.”