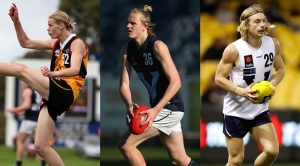 TAC Cup clubs have supplied 28 of the 56 players selected in 2017 NAB AFL Academy program, including 18 of the 30-player Level Two (top-age) group.

TAC Cup clubs also contribute nine of the 27 players being brought into the Level One group as bottom-age players in 2017, including Sandringham Dragons key-position twins Ben and Max King.

See the list of all TAC Cup players in the 2017 Level One and Two groups below.