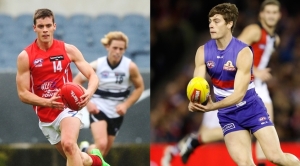 19-year-old Dunkley had 19 disposals, four tackles, three clearances and three inside-50s in the Western Bulldogs’ 14-point victory over North Melbourne at Etihad Stadium in Round 20.

The Sale product has played 10 AFL games this year after being selected with pick no.25 in the 2015 NAB AFL Draft. He was eligible to be taken by Sydney under the father-son rule – father Andrew Dunkley played 217 matches at the club from 1992-2002 – but the Swans elected not to match the Bulldogs’ second-round bid for him.

Dunkley, a 189cm mid-forward, made his AFL debut in Round 1 and has averaged 16 disposals, four marks and four tackles per game in 2016, also kicking five goals. He played 19 matches with Gippsland through 2014-15 and six games in the VFL with Richmond last year, while he also captained the NAB AFL Academy Level Two (top-age) squad in 2015.

Western Bulldogs coach Luke Beveridge said Dunkley had impressed many since arriving at the club.

“Josh is as determined to fast-track his AFL career as any young man we have been involved with,” Beveridge said. “He is very quickly establishing himself as an influential player and person at the Western Bulldogs and we are fortunate to have him as one of our own.”