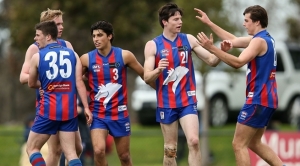 The North Ballarat Rebels find themselves in the top four for the first time in 2016 after powering away from the Northern Knights to record a 50-point victory at Eureka Stadium in Round 16.

North Ballarat’s quest for a finals double chance was also helped by the Sandringham Dragons – who previously occupied fourth spot – losing to the Oakleigh Chargers.

But the Rebels (11-5) had some nervous moments against the tenacious Knights (12th, 3-13), trailing early in the final quarter before piling on nine of the next 10 goals. Captain Jarrod Berry, prospective no.1 NAB AFL Draft pick Hugh McCluggage and Jamaine Jones each booted two majors in the late onslaught, while over-ager Cedric Cox was influential with 24 disposals and six inside-50s.

Meanwhile, the Dragons (5th, 10-5-1) fell outside the top four for the first time this season after being swamped by the Chargers (7th, 7-9) to the tune of 55 points at Warrawee Park.

Oakleigh slammed on eight unanswered goals before Sandringham put its first major on the board in the second quarter, but by then the match was as good as over. Dion Johnstone shone for the Chargers with five goals, while 19-year-old Lachlan Walker continued his fine season with 29 disposals, 10 inside-50s and two majors.

North Ballarat now faces the Eastern Ranges in the final home-and-away round as it attempts to seal a top-four position, while the Dragons need to defeat the Bendigo Pioneers and hope the Rebels fall in Round 17.

The Dandenong Stingrays (2nd, 13-3) shored up a top-two finish with a thrilling one-point triumph over the Murray Bushrangers (3rd, 11-4-1) at Shepley Oval.

The result was in the balance all match, with the Bushrangers appearing headed for victory when they took the lead approaching time-on in the final quarter. But the Stingrays rallied again, Hunter Clark becoming their hero when he produced the match-winning goal just seconds before the siren.

Murray’s loss keeps it only one game ahead of fifth-placed Sandringham but still 14 percentage points ahead of the Dragons with one game to play. Dandenong now meets the Geelong Falcons to decide which team claims the minor premiership.

The Falcons (1st, 13-3) were ruthless in defeating the Calder Cannons (8th, 7-9) by 90 points at Rams Arena on the weekend. The Cannons had four goals on the board and were within seven points of Geelong at quarter-time but the Falcons unleashed after that, Jackson McLachlan starring with four goals and Cassidy Parish a force in the middle with 26 disposals and nine clearances.

* CLICK HERE to read the latest edition of the AFL Victoria Record, including a feature on one player from each TAC Cup club you should know more about.