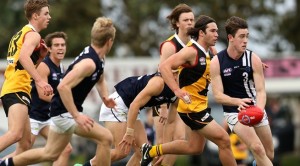 The Geelong Falcons and Dandenong Stingrays will face off for the 2016 TAC Cup minor premiership at Simonds Stadium on Sunday.

Just five percentage points separated the 13-3 teams after Round 16, and while their top-two spots are assured, bragging rights are on the line in the final home-and-away round. The Stingrays won their only minor premiership in 1997 when they went on to lose the Grand Final to the North Ballarat Rebels, while the Falcons missed the Grand Final when they last finished on top after the home-and-away season in 2013.

A finals double chance is also on the line this week, with fourth-placed North Ballarat only half a game ahead of the Sandringham Dragons. The Rebels displaced the Dragons in fourth spot last week – the first time the sides had been in and out of the top four respectively this year. North Ballarat faces the Eastern Ranges at Eureka Stadium on Saturday, while Sandringham meets the Bendigo Pioneers at Trevor Barker Beach Oval on Sunday.