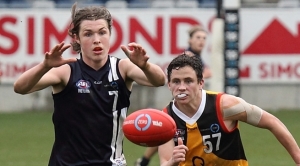 The Dandenong Stingrays claimed the 2016 TAC Cup minor premiership following a see-sawing final-term battle with the Geelong Falcons in Round 17.

Both teams went into Sunday’s match with records of 13-3 and their places in the top two assured ahead of finals, but with the Stingrays gunning for their first minor premiership since 1997 and the Falcons looking for the fourth in their history, a slog ensued at a wet Simonds Stadium.

Just 11 total goals were kicked until three-quarter time, but 10 majors were put on the board when the game opened up in a thrilling final stanza. Dandenong piled on five of the last six goals of the match in a rapid-fire onslaught once Geelong established a 10-point lead with eight minutes to play.

Dan Allsop and Myles Poholke helped put the Stingrays back in front shortly after, before the Falcons answered to take the lead once again. But late majors to first-gamer Jarrod Smith, Reece Piper and Tom Murphy sealed Dandenong’s 14-point triumph and a date with the Murray Bushrangers in a qualifying final in two weeks.

Meanwhile, Geelong will face the North Ballarat Rebels (12-5) in a qualifying final after the Rebels rose to third position with a 22-point victory over the Eastern Ranges (8th, 7-10) at Eureka Stadium.

In the first season of his second stint as North Ballarat head coach, Gerard FitzGerald guided his troops into the top four for the first time in 2016 last week and they rose again following Round 17, when Willem Drew starred for the Rebels with 30 disposals, nine tackles and seven clearances against the Ranges.

Murray trailed by just four points at the last break, but couldn’t stop the Chargers recording a third straight win to end the home-and-away season. Oakleigh was led again by bottom-ager Jack Higgins (31 disposals, one goal), while Louis Cunningham (24 disposals, eight rebound-50s) was also influential against the Bushrangers.

The Chargers will now face the Calder Cannons (7th, 8-9) in an elimination final after the Cannons pipped the Western Jets (10th, 5-12) by seven points at Rams Arena.

Western tied the scores at the 28-minute mark of the final quarter before Calder’s Ben Ronke (31 disposals, three goals) kicked a point from the next centre bounce and then Jean-Luc Velissaris scored his third major to seal victory.

The Sandringham Dragons (5th, 11-5-1) needed a monumental win against the Bendigo Pioneers (11th, 4-13) to overtake fourth-placed Murray on percentage, but eventually finished three percentage points outside the top four after ‘only’ rolling the Pioneers by 96 points at Trevor Barker Beach Oval.

Vic Metro representatives Tim Taranto, Oliver Florent and Andrew McGrath were all instrumental for the Dragons as they now prepare for an elimination final clash with Eastern.

- The Gippsland Power (9th, 5-12) moved up to their highest position of the season after defeating the Northern Knights (12th, 3-14) by 47 points at Preston City Oval.