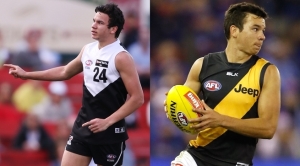 Former North Ballarat Rebels small forward Daniel Rioli was named the Round 22 nominee for the NAB AFL Rising Star award, making it 16 nominations out of 22 for TAC Cup graduates in 2016.

19-year-old Rioli had 16 disposals at 88 per cent efficiency, four tackles and kicked two goals in the Tigers’ nine-point loss to St Kilda at the MCG. He is averaging 10 disposals and three tackles per game and has booted 13 goals across 17 matches since debuting in Round 1 this year.

The Darwin, Northern Territory native – a cousin of Hawthorn champion Cyril Rioli – moved to Ballarat at the age of 15 to attend St Patrick’s College. He represented NT at the 2015 NAB AFL U18 Championships and kicked 14 goals in nine TAC Cup games for the Rebels before being selected by Richmond with pick no.15 in the 2015 NAB AFL Draft.

Rioli was one of the top performers at last year’s AFL Draft Combine and Tigers senior coach Damien Hardwick was pleased the youngster had already been able to show some of his elite traits at senior level.

“We can already see Daniel’s potential as an AFL player, and he’s working incredibly hard to continue to add to his game,” Hardwick said. “With his speed, agility and good decision-making, he’s an exciting player to watch, and will help to take our team forward in the years to come.”