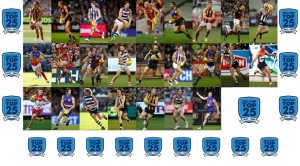 25 years, over 1,000 former players drafted to the AFL and these superstars of our game have been selected as the Top 25 in AFL Victoria’s TAC Cup competition’s history.

Celebrating the success of the TAC Cup since its inception in 1992, the remarkable talent to have emerged from the competition has been recognised with the release of the TAC Cup Top 25 players, featuring a who’s who of the best players in the AFL over the last two decades.

Selected by a panel consisting of Kevin Sheehan, Leon Harris and Anton Grbac, the accolades of this group are lengthy, with former TAC Cup players judged on their achievements and impact in the AFL.

Players needed to have participated in at least one TAC Cup game to qualify for selection in the TAC Cup Top 25, as well as playing 150 AFL games.

There is not much this group of former TAC Cup players has not achieved, with the Top 25 featuring:

With 2016 marking the 25th year of AFL Victoria’s long-standing partnership with the Transport Accident Commission (TAC), Chief Executive Officer Steven Reaper said highlighting  the competition’s best former players showcases the depth of high quality talent that has passed through the U18 competition.

“The Top 25 provides an opportunity to look back at the history of the TAC Cup and its players, highlighting the important role the competition plays in developing players both on and off the field, which should never be underestimated,” Reaper said.

“It was an unenviable task of narrowing down the long list of incredible former TAC Cup talent to a list of 25 players, but the calibre of players that missed out on selection underlines the depth of talented players helped in their development by our regions and their staff.

“While the TAC Cup helps players develop their skills and talent, our talent programs also assist in creating safe road users through key messaging instilled in our players since 1992 from our valued partner TAC, which continues in 2016 with the Towards Zero campaign.”

The TAC Cup Top 25 ranked in order from 1 to 25 will be revealed at the Morrish Medal night on Sunday September 4. The event will be live video streamed via taccup.com.au