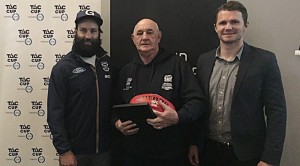 Scott has been involved in local football for a number of years in the region, from a player at Colac Imperials, to president of the same club then moving on to being president of the league. He has over the years helped the Faclons with timekeeping as well as security work.

His passion for football and his experiences along the way have been a great learning tool for the young Falcons that play at the club.

Scott was honoured by former TAC Cup players, Geelong Cats Jimmy Bartel and Patrick Dangerfield, who returned to their U18 club for a Towards Zero Player Night.

Bartel and Dangerfield are just two of many top AFL players who have come through the TAC Cup, a partnership that builds leadership skills, including being a safe road user, as young people get a kick-start to their football and driving careers.

TAC CEO Joe Calafiore said the return of role models like Bartel and Dangerfield, reinforced how TAC Cup players have the opportunity to show leadership on and off the field.