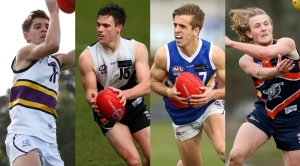 Barely anything has separated these teams in 2016, with the Bushrangers winning their first encounter by four points at Norm Minns Oval in Round 7 and the Stingrays prevailing by a solitary point at Shepley Oval in Round 16. Murray will need to keep an eye on Dandenong’s versatile forward line, which includes smaller goalkickers Sam Fowler and Dan Allsop as well as taller options Josh Battle and Tom De Koning, while regular defender Hunter Clark was the hero in Round 16 when he kicked the match-winning major just seconds before the final siren.

The Stingrays have conceded the fewest points in the TAC Cup this year, but Clark’s fellow backmen such as Oscar Clavarino and Mason De Wit will have their hands full minding a battery of Bushrangers tall forwards including Todd Marshall, Esava Ratugolea and Zac Sproule. With such potency inside 50, Murray needs its deep group of midfielders – including the likes of Will Brodie, James Cousins, Harry Morrison, Louis Pinnuck (pictured, left) and Isaac Wallace – to win the ball in close and get it forward quickly.

The Rebels come into this game as one of the form teams of the TAC Cup, having won 12 of 14 games since starting the season 0-3. One of those early losses was to the Falcons by 28 points at Simonds Stadium in Round 1, when dangerous Geelong forwards Jack Henry and Brett Blair combined for nine goals. North Ballarat couldn’t overcome the Falcons in Round 10 at Eureka Stadium either though, having a six-game winning streak ended by a 23-point loss.

Pressure in the midfield will be vital to the Rebels shutting down Geelong, which is the competition’s top team for points scored in 2016. The onus will be on the likes of Jarrod Berry, Willem Drew and James Gow (pictured, second from left) to limit the effectiveness of Falcons ball-winners like Max Augerinos, Lockey McCartney and James Worpel, or likely be punished on the scoreboard. However, North Ballarat’s prospective no.1 NAB AFL Draft pick Hugh McCluggage could be the ace in the pack – the midfielder’s classy skills and goalkicking ability (23 goals in 10 TAC Cup games this year) could prove match-winning.

After only dropping out of the top four for the first time in 2016 following Round 16, this could be a real danger game for the Dragons. Sandringham boasts an array of stars from Vic Metro’s successful NAB AFL U18 Championships campaign, but Eastern has top-end talent equal to perhaps any team. Making predictions for this clash difficult is the fact that when the Dragons defeated the Ranges by 43 points at Box Hill City Oval in Round 9, most of the teams’ best players were absent. But inject potential match-winners such as Oliver Florent, Andrew McGrath and Tim Taranto into Sandringham’s midfield and Callum Brown, Dylan Clarke and Jordan Gallucci (pictured, second from right) into Eastern’s on-ball division and the scene is set for a battle royal at the contests.

However, the deciding duels might instead involve ruckmen Lachlan Filipovic (Dragons) and Sam Hayes (Ranges), or Eastern’s defence – led by All Australian key back Jack Maibaum – against Sandringham tall forwards Hayden McLean and Isaac Morrisby. Dragons defenders would want to keep an eye on Eastern’s forward-line surprise packet from last year’s finals, Jaidyn Stephenson, too.

As they’ve done the last two years, the Chargers seem to be coming good at just the right time. They’ve won their last three games and have their first-choice line-up playing together consistently after interrupted years due to national duties, school football commitments and injury. That’s bad news for the Cannons, who probably enter this match as underdogs despite defeating Oakleigh by eight points at Rams Arena in Round 9. Many of Calder’s top players stood up that day, with Muhammad Saad bagging seven of his team’s nine goals, and Brad Bernacki, Hayden Blythe (pictured, right), Zach Guthrie and Ben Ronke all integral to the victory.

They’ll be up against a Chargers midfield now building chemistry between ball-winners such as Taylin Duman, Jack Higgins and Lachlan Walker, who’ll be looking to hit up Vic Metro hero Pat Kerr as well as Nick Larkey and Toby Wooller inside 50, with Josh Daicos and Dion Johnstone buzzing around their feet. Up the other end, TAC Cup leading goalkicker Karl Brown will likely need to take the points against opponents such as Jordan Ridley for the Cannons to prevail.