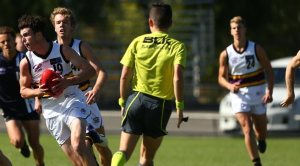 The umpires set to officiate in Sunday’s TAC Cup Grand Final have been announced, as James Szabo writes.

The clash between the Murray Bushrangers and Sandringham Dragons will be officiated by field umpires John Howorth, Leighton Rowe, Cameron Dore – a first-year umpire who has gone through the VFL Player-to-Umpire Program – and Annie Mirabile – who would be the first female to umpire a TAC Cup Grand Final – has been named as the emergency.

Keiran Ferguson, Simon Blight, Adam Bell and Patrick Jackson will be the boundary umpires for the game, while Chris Doyle and Matthew Edwards have been named as the officiating goal umpires. Sam Walsh is the emergency goal umpire.

State League Head Coach of Umpiring Cameron Nash explained the process behind selecting who the best candidates are to officiate in the biggest game of the year.