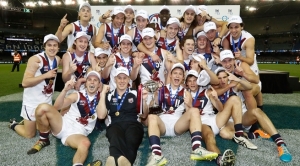 The Sandringham Dragons claimed the 2016 TAC Cup premiership with a tense 17-point triumph over the Murray Bushrangers in Sunday’s Grand Final at Etihad Stadium.

The match was an arm wrestle throughout, with the Bushrangers still only five points behind the Dragons with three minutes remaining in the match. However, late goals to Tom Maloney and Josh Trew secured Sandringham’s third TAC Cup flag after previous successes in 1999 and 2011, with the final scoreline 12.13 (85) to 9.14 (68).

The Dragons reached the Grand Final from fifth position after the home-and-away season, with head coach Jeremy Barnard’s group defeating the Eastern Ranges by two points, minor premier the Dandenong Stingrays by 61 points and then the second-placed Geelong Falcons by 22 points during the finals.

Sandringham midfielder/defender Andrew McGrath won the TAC Medal as the best player on the ground following a influential second half that saw him record 38 disposals and eight clearances for the game. Tim Taranto was also tough and prolific with 31 disposals, 11 tackles and five inside-50s, while Jack Scrimshaw (24 disposals, five tackles, one goal) starred in both defence and attack.

* CLICK HERE to read what Sandringham Dragons head coach Jeremy Barnard had to say about his team's triumph.

Opportunistic forwards Maloney, Ash Krakauer and captain Hamish Brayshaw all kicked two goals, but it was the Dragons defence that held things together with Murray controlling the stoppages for much of the contest. Reuben Hayward (25 disposals, six marks), Ari Sakeson (21 disposals, nine marks), Darcy James (13 disposals, seven rebound-50s, six tackles) and Max Williams (13 disposals, five marks) were reliable under pressure and took time to find the best option when rebounding the ball off half back.

Sandringham was on the board within the first two minutes of the game through an Oliver Florent goal from a forward-line stoppage, but a grinding defensive battle was staged for much of the first quarter. Murray’s early dominance at the contests led to a clear advantage in inside-50s, but the Dragons kept the Bushrangers to just one major in the opening term.

With Corey Lyons (24 disposals, one goal) and Harrison Burt (24 disposals) getting busy, Sandringham threatened to break the game open with two quick goals to start the second stanza, but a 16-point advantage was quickly eroded as three Murray majors snatched the lead back. In the dying minutes of the first half though, Brayshaw intercepted a kick inside 50 and Maloney capitalised on a clean centre clearance to send the Dragons into the main break 12 points ahead.

Goals to tall targets Marshall and McMullan put Murray back in front just minutes into the final stanza, but with both teams then missing several gilt-edged chances in front of goal, a classy snapped major to Scrimshaw gave the Dragons a lead they wouldn’t relinquish. Maloney and Trew’s late goals were the icing on Sandringham’s premiership cake.

* CLICK HERE to read about the stats that mattered in the Sandringham Dragons' Grand Final triumph.