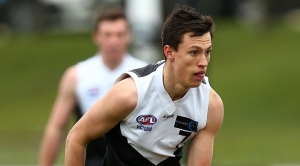 Hugh McCluggage’s list of achievements in 2016 highlights why the North Ballarat Rebels midfielder is in the frame to be the no.1 pick at the upcoming NAB AFL Draft.

The 185cm South Warrnambool product was a late addition to the NAB AFL Academy squad this year and promptly showed the football world what he was capable of as a smooth-moving, goalkicking on-baller.

McCluggage claimed the Morrish Medal and was named in the 2016 TAC Cup Team of the Year for averaging 29 disposals, four marks and five tackles per game and kicking 25 goals in 12 matches for the Rebels, while he also won Vic Country’s MVP and Coaches Award as well as U18 All Australian selection after averaging 20 disposals per game and booting seven majors in four matches at the NAB AFL U18 Championships.

taccup.com.au talked to McCluggage at the recent NAB AFL Draft Combine, where he didn’t participate in physical testing after pulling up from the NAB AFL U18 All Stars match on AFL Grand Final eve with a sore quad.

“My strengths are being able to create a bit of time and space with the ball in hand and getting teammates into space as well. That’s something I pride myself on, and I know it’s not perfect yet but it’s something I’ve tried to improve throughout the season.”

“Mainly just to count backwards in sevens – the old classic – and also to spell a word backwards.”

“Probably a bit of contested stuff; I guess I have a lighter frame at the moment. I’ve played through the inside most of the year so I’ve constantly been working on, one, making my body a little bit bigger and, two, having that drive inside the contest.”

“I love watching players like (former North Melbourne and now-Collingwood player) Daniel Wells and (West Coast’s) Andrew Gaff, who create a lot of time and space and also push forward and kick a few goals.”

“At the start of the year I was unsure how I’d go. I suppose being with the AFL Academy gives you confidence that you can mix it with the top players, but I was still unsure. From then to now, it’s been a pretty full-on few months and I’ve enjoyed every minute of it. I’m just going along for the ride.”

“Probably against Murray (in Round 13, when) we had a good win. I think that’s the best we played as a team and I was happy with my contribution (36 disposals, six clearances, six tackles, three goals). We held our structures really well and just played really good team footy. That was a big turning point in our season.”

“Max Augerinos from Geelong – he was a very good player in our Qualifying-Final loss. We lined up on each other and I’ll be the first to admit he had the better of me on the day. I had to look at that and look at ways I could try and beat him.”

- Jarrod Berry: “He’s pretty much just a contested beast. He puts 100 per cent into every game and puts his body on the line. He’s also a very good leader and a very skilful player.”
- Cedric Cox: “He came into our team late as a 19-year-old and he’s pretty much just flourished in the environment. He’s got very good skills on both sides of his body and he can run and carry.”
- Willem Drew: “He’s got an amazing tank and probably the quickest hands of someone I’ve played with. He’ll get you into space and he’ll fire out a handball you don’t think is possible.”
- Tom Williamson: “He’s also got a good engine. He plays off half back usually and a bit off the wing. I think he’s got very good skills.”

“I think (Sandringham’s) Andrew McGrath had a very good end to the season and he’s definitely my pick for the no.1.”