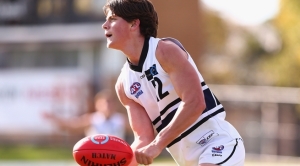 A mid-season shift from the Northern Knights’ forward line into the midfield saw Patrick Lipinski burst onto the radars of AFL clubs.

The 188cm Eltham product kicked 11 goals in his first six games of the TAC Cup season but soon drew on his basketball background to turn himself into a prolific tall on-baller.

taccup.com.au talked to Lipinski at the recent NAB AFL Draft Combine, where he recorded the equal-second-best score in the clean hands test and finished in the top 10 in the beep test.

“My strengths are probably my clean hands and composure, and contested marking for my size. I’ve also got an alright goal sense.”

“Probably to divide 217 by three or to spell ‘octopus’ backwards.”

“I’ve always been trying to work on my pace and my kicking, and probably getting some more uncontested ball on the outside because a lot of what I get is just contested.”

“Coaches told me to watch (Carlton’s) Patrick Cripps and (Western Bulldogs’) Marcus Bontempelli because they’re taller midfielders and I’m a bit taller for a midfielder, so I’ve been trying to watch them, take a few tips off them and emulate that in my game.”

“I wasn’t really expecting much this year. I just wanted to play every game and enjoy it and see if I could develop, and I think I have. It wasn’t until I got the invite to the national Combine when I thought I was a chance to get drafted. Since about July, I’ve really been having that goal to get drafted.”

How do you think you handled your change from being a forward to a midfielder this year?

“I was pretty surprised how I went with the change. I wasn’t expecting too much from myself, but I played a couple of good games as a midfielder and really enjoyed being in the contest and more involved in the game.”

How has your basketball background helped your football?

“My last basketball thing was at the end of last year – I went to America with my Eltham basketball side. I probably chose footy in September last year when I got invited to the Knights’ pre-season. It was tough, but I’d always loved footy more. I was always a bit of a smaller (basketball) player, so being around bigger bodies you have to be smart and composed in tight situations. I think that’s helped me with footy – when I moved into the midfield, I could make the right decision with handballs because I’m used to being in compact situations.”

“Probably against Western (in Round 9) in the wet (30 disposals, seven tackles, six clearances, five inside-50s). That was my second game in the midfield, so it was a good experience playing in the wet and getting involved in and under the packs.”

“I was injured for about six weeks (mid-season) and my first game back was against North Ballarat (in Round 16) and I got thrown into the midfield and had to play on Willem Drew and Hugh McCluggage. They were probably the most difficult players I’ve played on, purely because of how hard they ran, and they ran to smart places.”

“I was hoping to get into a commerce course, so I guess I’d be going to university and trying to get my degree.”