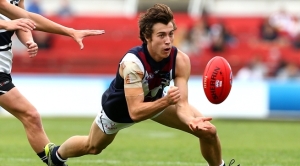 Sandringham Dragons midfielder/defender Andrew McGrath couldn’t have done much more to push his case as the potential no.1 pick in the 2016 NAB AFL Draft.

The 179cm East Brighton product was a key part of Sandringham’s TAC Cup premiership team, averaging 32 disposals, five marks and five tackles per game in 10 matches and being awarded the TAC Medal for the best player on the ground in the Grand Final as well as earning selection in the TAC Cup Team of the Year back line.

McGrath also played a pivotal role in Vic Metro’s successful NAB AFL U18 Championships campaign. He co-captained the undefeated Metro team (alongside Eastern’s Jordan Gallucci) and averaged 24 disposals per game across four matches to win Metro’s MVP Award (jointly with Eastern’s Dylan Clarke) and a spot in defence in the U18 All Australian team.

“Spelling certain words backwards and subtracting in sevens from random numbers are probably the weirdest ones.”

“Consistency with my kick is something I’ve worked pretty hard on over the off-season, and it’s improved a lot since then but it’s still something that constantly needs improving.”

“(Western Bulldogs’) Jason Johannisen is probably my favourite player in the AFL right now. We play sort of similar roles and just the way he’s emerged this year has been outstanding for the smaller blokes. We’re similar heights and similar builds, so he’s probably someone I idolise.”

“I guess I have exceeded the expectations that I put on myself and people around me put on me. Proving some people wrong is also bitter-sweet, I guess. A lot of people didn’t think I was up in the top group of blokes in the draft this year and there was always a goal to get in that group. I worked pretty hard to try and match it with some of the best players and see how they went about it. Learning from being just below some of those blokes has really helped me.”

“I think the (U18 Championships) game against Vic Country when I had to move back onto a red-hot Benny Ainsworth (from Gippsland Power, who had kicked three goals in the third quarter). That was probably my best performance to date, limiting his impact and then in turn helping us win the game (with 23 disposals of his own).”

- Hamish Brayshaw: “He’s a competitive beast. He’s had a tough run with injuries but he always finds a way to get out on the park and lead the boys. He’s probably the loudest bloke at the Combine but he’s really personable. We all love Hamish.”
- Oliver Florent: “He’s had a very difficult year with some family circumstances, but I think he’s learnt a lot and he’s really matured as a player and a person. I’m not surprised at all that he’s rising up the draft order.”
- Jack Scrimshaw: “I’d say he’s the most versatile player in the draft. He can probably play any position on the ground, even in the ruck if he needed to. He’s still a bit wiry but he’s really agile. He’s got probably one of the best sidesteps I’ve seen.”
- Will Setterfield: “Just the way he conducts himself, you wouldn’t think he’s as good a player as he is; he’s so humble about his ability. His contested work is unbelievable at the size he is (190cm).”
- Tim Taranto: “He’s that perfect size (186cm), an inside midfielder who can go forward and kick goals. He’s just classy in traffic and can finish his work off.”

“I’d probably be going to uni next year. I’ve put in commerce and commerce/arts as my preferences.”

“I’d pick (North Ballarat’s) Hugh McCluggage. He’s a class act on and off the field.”