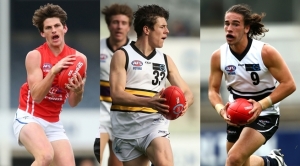 taccup.com.au takes a look at who the best-and-fairest winners from each TAC Cup club are and how their 2016 seasons played out.

187cm bottom-ager Betson claimed the Neville Strauch Memorial best and fairest ahead of fellow bottom-agers Darby Henderson and Laine Fitzgerald in equal-second. The Mooroopna product played all 18 matches as a key defender in 2016, averaging seven disposals per game.

181cm over-age mid-forward Ronke won the Robert Hyde Medal from reliable defender Zach Guthrie in second and bottom-age midfielder Brad Bernacki in third. Having returned to the Cannons after playing in a VAFA premiership for St Bernard’s last year, he kicked 19 goals and averaged 20 disposals and four tackles per game in 15 TAC Cup matches, also receiving an invite to the Victorian State Combine.

187cm over-age midfielder Glen shared Dandenong’s best-and-fairest award with 184cm Vic Country midfielder Poholke, while Nathan Scagliarini finished runner-up behind the pair. Beaconsfield product Glen returned to the Stingrays after missing out on being drafted and was prolific in 2016, averaging 22 disposals and four marks per game in 17 TAC Cup matches, also representing the Casey Scorpions and Frankston twice each at senior VFL level. Poholke, a Sorrento product and member of the NAB AFL Academy, starred at TAC Cup level by kicking 12 goals and averaging 21 disposals and four tackles per game across 13 matches.

Prolific 187cm Ranges captain Clarke took home the Pennington Medal from rapidly emerging mid-forward Josh Begley in second and bottom-ager Thomas North in third. The Rowville and Knox junior – and brother of North Melbourne’s Ryan Clarke – kicked seven goals and averaged 29 disposals and eight tackles per game in just eight TAC Cup matches to earn selection in the TAC Cup Team of the Year midfield and an invite to the NAB AFL Draft Combine. He was also named in the U18 All Australian team and jointly won Vic Metro’s MVP Award after representing Metro in four games at the NAB AFL U18 Championships.

198cm over-age ruckman/key-position player Patullo (pictured, left) secured Gippsland’s best-and-fairest award ahead of athletic midfielder/defender Will Leslie in second. The Warragul junior kicked 11 goals and averaged 15 disposals, five marks and 13 hitouts per game in 16 TAC Cup matches to earn selection in the TAC Cup Team of the Year back line. He also played two games for the Casey Scorpions at senior VFL level.

185cm inside midfielder Cousins (pictured, centre) claimed the John Byrne Medal ahead of mobile key defender Ryan Garthwaite and over-age goalkicker Lachlan Tiziani, who both tied for second. The Mansfield junior kicked 13 goals and averaged 22 disposals, four marks and four tackles per game in 18 TAC Cup matches – including 20 disposals, eight inside-50s and six clearances in Murray’s Grand Final loss to the Sandringham Dragons – to earn selection on the TAC Cup Team of the Year interchange. He also played one game for Richmond at VFL level and received an invite to the Victorian State Combine.

185cm goalkicking midfielder McCluggage took home the Adam Goodes Trophy after pipping second-placed Willem Drew and third-placed Callan Wellings. The South Warrnambool product enjoyed a decorated 2016 season, claiming the Morrish Medal and being named in the TAC Cup Team of the Year after averaging 29 disposals, four marks and five tackles per game and kicking 25 goals in 12 matches for the Rebels. McCluggage also won Vic Country’s MVP and Coaches Award as well as U18 All Australian selection following his stellar performances at the NAB AFL U18 Championships.

182cm goalkicking midfielder Lyons secured Sandringham’s best-and-fairest award from fellow on-baller Josh Trew in second and defensive pair Reuben Hayward and Darcy James in equal-third. The St Peters junior – and brother of Adelaide’s Jarryd Lyons – kicked 13 goals and averaged 24 disposals and five marks per game in 15 TAC Cup matches – including 24 disposals, four clearances and a goal in the Dragons’ Grand Final triumph over the Murray Bushrangers. He also represented Vic Metro in three games at the NAB AFL U18 Championships and received an invite to the Victorian State Combine.

189cm midfielder/defender Romensky claimed the Barry Round Medal from Jets co-captain Oscar Junker in second and over-ager Daniel Foley in third. The Maribyrnong Park junior averaged 24 disposals and seven tackles per game in 15 TAC Cup matches to earn selection in the TAC Cup Team of the Year back line and an invite to the Victorian State Combine. He also represented Vic Metro in three games at the NAB AFL U18 Championships and Williamstown twice at senior VFL level.