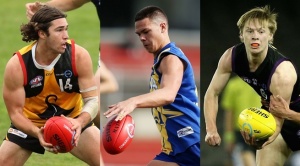 22 TAC Cup players eligible to be drafted in 2017 will train with AFL clubs for two weeks during December as part of the NAB AFL Academy program.

Western Jets pair Lachlan Fogarty and Cameron Rayner (pictured - centre) will have the chance to experience the inner sanctum of reigning AFL premiers the Western Bulldogs, while GWS Academy members Jarrod Brander (Bendigo Pioneers) and Charlie Spargo (Murray Bushrangers - pictured, right) will train with the Giants, who’ll have first rights on them at the 2017 NAB AFL Draft.

See the list of TAC Cup players training at AFL clubs during December as part of the AFL Academy program below.

The Level Two group completed a training camp in Darwin under new Academy head coach Luke Power recently and will also travel to Florida and Los Angeles in the United States for a high-performance training camp in January.