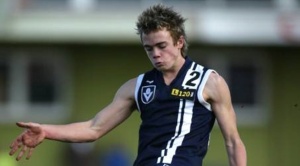 Daniel O’Keefe admits there was some romance to his appointment as Geelong Falcons head coach in October.

O’Keefe, only 28 years of age, captained the Falcons to a TAC Cup semi final and won their best-and-fairest award just 10 years ago in 2006.

His love for the club drove O’Keefe to keep in contact with key Geelong figures through the following years – including his three ill-fated seasons on Sydney’s AFL list from 2007-09. He did some U16 assistant coaching with the Falcons four years ago before returning in a leadership and development coaching role in 2016.

So when five-year head coach Andrew Allthorpe decided to move on from his role at the end of the season due to family and work commitments, Talent Manager Michael Turner simply looked within the club’s inner sanctum for a suitable replacement.

“To say I’m excited and proud is an understatement,” O’Keefe said of his new position.

“I’ve always held this club dearly to my heart and always followed up with Mick Turner and (my coach in 2006) Garry Hocking when I went up to Sydney. I always wanted to make sure that everything was running smoothly even though I’d left the club.

“My passion for the club is very high – it always has been and always will be. I’ve always wanted to do something like this, and it’s probably happened a little bit sooner than I thought it would but it’s very exciting.”

O’Keefe’s AFL career was ruined by injury and he failed to make his senior debut in three seasons on Sydney’s list after being selected at pick no.15 in 2006 AFL Draft. He said the lessons learned as a youngster from Warrnambool struggling to make it at the elite level in another state would help him guide a new generation of AFL aspirants, despite his relatively tender coaching years.

“While it didn’t work out how I wanted it to, the three years I had in Sydney taught me a lot in terms of, firstly, growing up, but more importantly about not taking things for granted,” O’Keefe said.

“The same goes for the kids at the Falcons – they’ve only got one, two or three years maximum here. You’ve really got to make the most of your opportunities because you never know when your last game could be or when you might finish up.”

O’Keefe has a tough act to follow, with predecessor Allthorpe departing with a record of 58-33-4 after leading Geelong to the TAC Cup finals in all five of his years in charge – including preliminary finals in 2013 and 2016.

“I feel Andy and I probably have similar characteristics,” O’Keefe said.

“Andy put a lot of faith into his coaching panel and that’s something I’ll certainly do as well, giving the assistant and development coaches some real ownership in their roles.

“(In terms of game plan,) I want to continue a lot of the things Andy has already established because, one, we know it works and, two, a lot of the top-age kids next year have already played through it. A lot of it will stay the same and I guess I’ll twist and turn a couple of things that might hopefully take us to a flag and potentially get a few more kids drafted.”

He also worked with some of Geelong’s talented 2017 bottom-age players as Vic Country’s forwards coach for the 2016 NAB AFL U16 Championships.

“If I didn’t do the U16s for Vic Country under (former Vic Country High Performance Manager) Leon Harris and (former U16 head coach) Matt Battistello, I don’t think I would’ve felt comfortable in taking this role,” O’Keefe said.

“That, in conjunction with working pretty closely with Andy Allthorpe, gave me a lot more confidence in being able to do a good job. I’ve got some great support staff around me and a lot of new faces too – all our 2017 assistant coaches are new to the roles, so it’s sort of a fresh start and there’s a fresh feel here.”