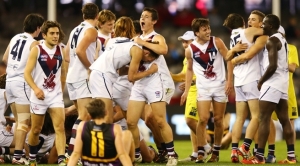 The 12 TAC Cup clubs will each play 18 home-and-away games (up from 17 games in 2016) before the top eight teams take part in a revamped three-week finals series.

In the following week’s preliminary finals, the winner of Elimination Final 1 will meet the winner of EF4 while the winners of EF2 and EF3 will also face off for a spot in the TAC Cup Grand Final.

The 2016 grand finalists provided 18 players selected in either the 2016 NAB AFL Draft or Rookie Draft. Premiers the Sandringham Dragons had eight players join AFL lists for 2017 while runners-up the Murray Bushrangers boasted a competition-high 10 selections. Those players were among 58 of this year’s TAC Cup graduates who made it onto AFL lists as either national draft selections (44 players) or rookies (14).

The 2017 TAC Cup season will kick off on March 24 with the Calder Cannons meeting the Eastern Ranges under lights at Rams Arena on a Friday night. Round 1 will be the first of three straight weekends on which teams will only face off against fellow Country or Metro teams, with a Country triple-header at Bendigo’s Queen Elizabeth Oval taking place on Saturday April 8. There will be another six rounds divided between Country- and Metro-only fixtures throughout the season.

2017 NAB AFL U18 Championships Division 1 games will be played from the weekend of June 10-11 to Wednesday July 5. As in 2016, Vic Country and Vic Metro will play four games each, with Metro having a bye in Round 1 of the Championships and Country having the bye the following weekend in Round 2. TAC Cup Rounds 10-12, which take place in the middle of the U18 Championships, will be deemed ‘Futures Rounds’ to highlight the up-and-coming talent on TAC Cup club lists that will be given extra chances to shine in the absence of their national-representative teammates.

There will be six Development Weekends without any TAC Cup fixtures throughout the 2017 season, with two of these to occur during the U18 Championships.

The final home-and-away round will showcase the TAC Cup’s best talent during the AFL’s pre-finals bye weekend across September 2-3, with double-headers scheduled at Rams Arena on the Saturday, and at IKON Park on both the Saturday and Sunday.

Other key features of the 2017 TAC Cup fixture include:

- The Murray Bushrangers and Bendigo Pioneers travelling citywards to meet at Punt Road Oval in Round 1;

- The GWV Rebels welcoming Bendigo to the recently-upgraded Alfredton Recreation Reserve in Round 2;

- The Dandenong Stingrays ensuring Frankston Oval sees high-level football in 2017, with home games at the former VFL venue in Rounds 4 and 14 (the latter also being part of a TAC Cup double-header at the ground);

- The Eastern Ranges meeting Geelong at Bayswater in Round 4 and the Gippsland Power at Healesville in Round 6; and

- Two triple-headers in Round 16, with the Metro teams playing off at Rams Arena on the Saturday and the Country teams doing battle at Eureka Stadium on Sunday.

The 2016 drafts by the numbers