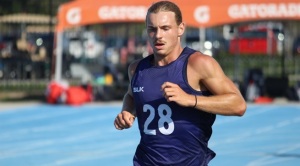 James Worpel’s outstanding 2016 season and subsequent addition to the NAB AFL Academy was a case of good form and unexpected good luck.

The 185cm Geelong Falcons midfielder was one of only two bottom-age players to make the TAC Cup Team of the Year (along with Eastern Ranges big man Sam Hayes) after averaging 20 disposals and six tackles per game and kicking 11 goals in 15 matches for the preliminary finalists.

He started the year unsure of his prospects at the Falcons but quickly rose to prominence thanks to his tough, competitive style of play and a stroke of luck that helped him represent Vic Country in all four games at the NAB AFL U18 Championships.

“I surprised myself heaps,” Worpel said of his performances in 2016.

“I came in to the year just trying to get a gig at the Falcons. I started off in Round 1 and probably didn’t play a great game until Round 3, then Vic Country came along and I was very, very surprised to make the squad. I thought I was no chance to get a gig but obviously I was doing something right.

“I think I hit some pretty good form (with Geelong) and maybe got a bit of luck through a couple of injuries at Vic Country to Jy Simpkin (Murray Bushrangers) and Alex Witherden (Falcons) who missed out and probably would’ve taken my spot.”

Simpkin and Witherden both suffered broken legs early in 2016 playing school football following impressive bottom-age seasons in 2015. Simpkin would likely have roamed Vic Country’s forward line as a dangerous smaller goalkicker, with Witherden’s skilful boot stationed across half back.

Despite their misfortune, the year became a win-win situation for all involved: Simpkin was selected by North Melbourne with pick no.12 in the 2016 NAB AFL Draft and Witherden by Brisbane at no.23, while Worpel took the chance to elevate himself into the conversation about 2017’s top prospects.

The Bell Park junior was added to the AFL Academy Level Two squad late last year alongside 22 other TAC Cup players and recently attended the Academy’s annual high-performance training camp in the United States. The group spent a week in January training at the IMG Academy in Florida before a further week in Los Angeles.

“It was my first time overseas which was exciting in itself,” Worpel said. “It was just an eye-opener going to a different country and their facilities and seeing all their sports.

“I really liked the Academy meetings and just the downtime you get with all the boys there because they’re just a great bunch of blokes. I loved learning so much from them all and just coming back probably a better person and a better footballer as well.

“I went in with a mindset to improve my kicking and the work (recently retired AFL player and Academy assistant coach) Nick Dal Santo does at training is amazing. I reckon about 90 per cent of the boys came back feeling a lot more confident with their kicking.”

While Worpel knows his foot skills need to improve to take his game to the next level, his natural competitiveness doesn’t need any work. His clearance and tackling ability is influenced by the likes of new Sydney captain Josh Kennedy and North Melbourne hard-nut Ben Cunnington, while he’d love to develop the explosiveness of Richmond match-winner Dustin Martin.

Like Martin often does, Worpel will likely move forward more in 2017 in order to develop his ability to hit the scoreboard. He also plans on developing his leadership ability by putting his hand up to captain Geelong, a year after achieving the rare feat of being a member of the club’s leadership group as a bottom-ager.

It’s all part of Worpel’s drive to follow in the footsteps of recent former Falcons and rising AFL stars Darcy Parish (Essendon) and Rhys Mathieson (Brisbane) and successfully back up a stellar bottom-age season as an 18-year-old.

“I’ll probably have the same mindset I was in last year,” Worpel said.

“My main goal at the moment is to get a leadership spot at the Falcons and hopefully kick off Round 1 with a bang.

“I don’t feel much pressure after last year; I probably feel more determined to meet expectations that people have of me and I have of myself. At the end of the day, I just want to play the best footy I can and do as much as I can to put myself in a good position come the end of the year.”

* Photo: James Worpel training during the AFL Academy's high-performance camp in the US in January