Summer to remember for Power duo 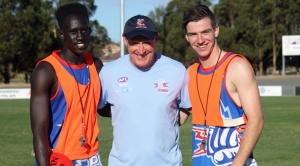 It’s been a big summer for two Gippsland Power players.

As members of the NAB AFL Academy, Aidan Quigley and Changkuoth Jiath have not just completed a major training block, they have had experiences of a lifetime.

The AFL Academy brings together the best young footballers from across the country to develop their strength, fitness, skills and personal traits. Through various training camps the Academy aims to prepare each player for the NAB AFL Draft and a potential AFL career.

In December, each Academy member spent a week with an AFL club to get an understanding of what life is like as an AFL footballer. It certainly wasn’t sitting on the sidelines taking it all in at arm’s length – the boys were out on the track participating in pre-season training sessions alongside their AFL idols. Quigley spent time at Collingwood while Jiath went to Hawthorn, with both learning an enormous amount and loving every minute of it.

In January, Quigley and Jiath were amongst the 36 AFL Academy members who travelled to the USA for a two-week camp. Along with coaches and staff, a number of AFL club recruiters were also a part of the travelling group.

Jiath admitted that having the recruiters around all of the time was “a little daunting at first, but you just had to deal with it”.

The first week was spent at the IMG academy in Florida, a cutting-edge training facility regarded as one of the best in the world. The second week was spent based in Los Angeles.

The sheer size of the IMG Academy blew Quigley away: “It was pretty surreal how big everything was. We had to get on little buggies with carriages to go around the whole joint.”

Jiath was impressed with the professionalism at IMG: “Everything there was so professional; everyone there was really nice. It was a good environment to be in.”

Both boys described the training sessions on the trip as “full on” – two and a half hours of hard running mixed with skills work. The sessions were conducted under the watchful eye of new AFL Academy coach Luke Power and his assistants, including former AFL players Brad Johnson and Nick Dal Santo.

Power, a three-time premiership player with the Brisbane Lions, is a well-respected voice in AFL football. Quigley and Jiath took the opportunity to learn as much as they could from him. “He’s a really good bloke, a good coach,” Jiath said. Quigley added: “He gives you a rocket when you need it.”

During the trip the boys were able to develop relationships with all of the coaching staff.

“It’s really good to have all the ex-AFL players around,” Quigley said. “The experience that you get off them to help your game is great.

“They genuinely want to help you. It’s good to have them as a resource.”

It wasn’t all hard training sessions on the trip. There were a number of unique learning experiences along the way, including trips to US colleges and watching college football and NBA games. Jiath understood just how special these experiences were.

“It was such a great opportunity,” he said. “Not everyone gets the opportunity to do what we did. It was amazing to see the athletes up close.”

As fortune would have it, the AFL Academy schedule coincided with the Milwaukee Bucks’ Florida road trip. Quigley and Jiath had the opportunity to talk post-game to Australian Matthew Dellavedova, who has forged a successful NBA career. He stressed to them the importance of hard work and how his work ethic had created opportunity.

After such a big workload over summer, Quigley and Jiath are now easing back into Gippsland Power training on modified programs. Rather than playing in a recent intra-club practice match, they had the challenging role of umpiring for their teammates.

The boys will build back into full training with the focus on being ready for the Power’s Round 1 TAC Cup match against the Dandenong Stingrays.

Through the AFL Academy, Quigley and Jiath’s development will also be monitored closely.

“We have individual programs that we work to now and they will monitor things like how many games we play throughout the year,” Quigley said.

The AFL Academy will reconvene again in March for a 10-day camp.