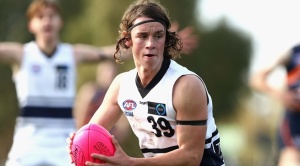 2016 DRAFTEES: Patrick Lipinski (pick no.28 to Western Bulldogs) / Matthew Signorello (no.62 to Adelaide)

Nick Coffield (18 games, ave. 13 disposals in 2016): “Nick’s an intercept-marking, rebounding backman with very good speed and agility. He has a really good, long, penetrating right foot. We’re probably going to challenge him to be the best intercept, rebounding backman in the TAC Cup this year. He’s always played footy but he’s also been a pretty high-level basketball player as well. He goes to school at the footy factory out at Whitefriars where he’s the football captain – he also has good leadership skills.”

Patrick Naish (nine games, ave. 17 disposals and four marks in 2016): “Patrick possesses the ability to run and carry with the football and we think he’s going to be a good inside-50, goal-assist type of player this year. He has a beautiful long, penetrating right foot kick. He’s really improved his running – both his sprint and endurance – over the off-season and become a bit more powerful. He’s father-son eligible for Richmond (see below for more) and in the AFL Academy.”

Ethan Penrith (17 games, ave. 13 disposals and four tackles in 2016): “Ethan had a really good season last year predominantly as a rebounding, running small backman. He possesses an elite sidestep and burst from the contest, and really good run-and-carry ability. He’s an exciting type of player and will definitely catch the eye throughout the course of the year. He shows good leadership and is a good character. He’s indigenous and has done a lot of training with Carlton over the pre-season through their Next Generation Academy.”

Jack Petruccelle (two games, four goals in 2016): “Jack’s really exciting and has incredible athleticism. He was in the AIS Academy for basketball but has set his sights on football in 2017. He’ll probably play as a half forward type of player who can get up the ground and then use his pace to find space and really take the game on. He’s been working on developing his game sense and his kicking in the off-season and we’re really excited to see what he can do at TAC Cup level.”

Joel Naylor (seven games, ave. 10 disposals and four marks in 2016): “Joel’s a really strong-bodied key-position player and a really long, penetrating left-foot kick. His intercept/contested marking and ability to hit kicks that others can’t are probably his points of difference. We think he can have a real impact at either end of the ground.”

Marcus Lentini (pictured - 13 games, nine goals, ave. 24 disposals in 2016): “Marcus really came on last year. During the middle part of the season he had three games of 30, 33 and 36 disposals as a midfielder. He’s had a really good off-season working hard on his kicking and ball use, and has been in the gym getting fitter, stronger and faster.”

Alex Federico (eight games, ave. 12 disposals in 2016): “Alex has really good endurance and overhead marking ability. He’s a versatile player who has been training as a midfielder after playing the majority of last year down back.”

Adam Tomaro (11 games, ave. 17 disposals and four marks for the Oakleigh Chargers in 2016): “Adam missed his whole bottom-age year at Oakleigh with a shoulder reconstruction. He played games for the Chargers when he was available last year but had an outstanding school season with Marcellin where he captained a premiership. He’s a good overhead mark, a really smooth mover and is a beautiful user of the football. We’re going to work on developing him as an inside midfielder who can then spread really hard from the contest and use his skill and his smarts on the outside.”

Sam Binion (15 games, nine goals, ave. 11 disposals and three marks in 2016): “Sam missed his whole bottom-age year with glandular fever and a foot injury and he also missed the 2016 pre-season. He played more as a key-position player last year but with his athletic attributes we see him as a big, strong inside midfielder.”

Matthew Harman (eight games, ave. five disposals and five hitouts in 2016): “Matthew’s a 200cm ruckman. He’ll get every opportunity to ruck for us and we think he can be a real improver – similar to Chas Roberts last year when he played some good footy as a 19-year-old ruckman. He’s played district cricket previously but he’s decided to give football a good run.”

Jamison Shea (17 games, nine goals, ave. 16 disposals and five marks in 2016): “Jamison played a fair bit of footy for us last year but was pretty lightly-framed; he’s put on eight kilos over the off-season through our strength and conditioning program. He’s a smooth-moving, really good link-up forward who’ll work really hard to be a marking player all around the ground.”

“We’re disappointed in our win-loss record over the last three years (6-11 in 2014, 4-13 in 2015, 4-12 in 2016). While player development is our main focus, we want to bring the Knights back to being one of the stronger TAC Cup regions, which traditionally we have been. Going through a pretty poor year last year has probably really galvanised the playing group and they want to have some more on-field success. About midway through last year we made a real effort to put time and effort into some of our bottom-age players – they played every game when they were available for us and in key roles. We think that will hold us in pretty good stead this year.”

“We feel really lucky to have someone of Justin Wenke’s standing and experience in our head coach’s role. He’s a tireless worker, really driven and we’re already seeing some really good results in individual players from what he’s been able to do with them. He spent about seven years coaching Oakleigh’s U16 program and then three years as head coach (from 2012-mid 2014, including the 2012 TAC Cup premiership), so he saw a lot of players go through and he really understands the different needs of individual players.”

“We’ve also changed every line coach. Phil Plunkett’s coached four premierships in the Northern Football League and came through the Knights as a player – he’s our midfield coach. Marcus Hastings was Coburg’s development coach in the VFL last year – he’s our back line coach – and Peter Buszard played at Oakleigh under Justin and then coached with him at the Chargers and the Yarra Junior Football League – he’s our forward line coach.”