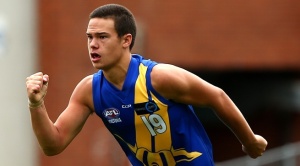 Cameron Rayner (pictured - eight games, 17 goals, ave. 18 disposals, four marks and four tackles in 2016): “Cameron had a really good year as a bottom-age player to the point where he played himself into the AFL Academy right at the finish. He’s strongly built, very hard at the football and a terrific competitor. He has a penetrating kick, is excellent over his head and is a versatile type of player who we’ll be working really hard with to ensure he becomes a very effective inside midfielder. There’s no question he can take a mark and kick a goal, but he’s about 189/190cm so he’s a great size to be a midfielder.”

Lachlan Fogarty (five games, ave. 24 disposals and eight tackles in 2016): “Lachie’s very highly skilled, an excellent decision-maker, and really, really competitive. He needs to build a bigger tank but certainly has a capacity to get to where the ball is around the ground. He was our best player in his 16-year-old season in 2015 when he represented Vic Metro. He’s also a member of the AFL Academy.”

Tristan Xerri (11 games, 13 goals, ave. seven disposals, two marks and 11 hitouts in 2016): “Tristan’s a late developer – we picked him up halfway through 2016. He’s over 200cm tall, a good athlete, very mobile, excellent below his knees and very capable over his head. He can not only get it in the air but also on the ground so he’s going to be a bit of an all-rounder, and at that height with the potential to grow a little bit more, we think he’ll be someone that’s right in contention.”

Nick Stuhldreier (15 games, ave. 17 disposals and four marks in 2016): “Nick had a fantastic season last year as a bottom-age player and received our Best First-Year Player Award. He has a fantastic attitude, a great desire to succeed, a fantastic work ethic and is someone who has fantastic leadership qualities.”

Luke Hitch (14 games, ave. 12 disposals and four tackles in 2016): “Luke is a fantastic competitor, really hard at the footy, never gives up and is capable of being a small defender. We’ll also try to run him through the midfield to give him that opportunity.”

Josh Mould (no games in 2016): “We’re looking forward to seeing Josh play this year. He suffered a stress fracture of the foot which was really nasty and took a while to diagnose, and he missed all of last year and a fair part of 2015 trying to get over it. His training has been outstanding so if he can strike a little bit of confidence early in the year and play a couple of good games, he’ll put himself into contention.”

Riley Ham (nine games, ave. six disposals and 11 hitouts in 2016): “Riley’s a big boy who, along with Tristan Xerri, got an opportunity in the middle of last year. He had a couple of really good games playing at centre half forward and if he can play well again this year, he’ll give himself some sort of chance.”

Judah Dundon (eight games, six goals, ave. 19 disposals in 2016): “He was absolutely flying as a 17-year-old in 2015 but had to have a plate inserted into his forearm and that was the end of his season. At the start of last year he was full of confidence but got a fracture in his tibia. He played eight or nine games in the middle of the season and started to get a bit of form back, but then exactly the same injury occurred in his other leg so that was the end of his season. If he can find some really good form, we think he’ll be a good player.”

Brock McGregor (seven games, four goals, ave. 12 disposals, five marks and 17 hitouts in 2016): “Brock’s had a back issue for a long time now but he’s training really well at the moment. He’s a power forward. He also played for Penleigh and Essendon Grammar School last year and didn’t play a lot of TAC Cup footy.”

Alex Bouris (four games, ave. nine disposals in 2016): “Alex played early on last year but hurt the medial ligament in his knee and missed pretty much the rest of the season. He showed a bit of promise playing at centre half forward. He’s a mobile, lead-up forward who’s good over his head and a nice left-foot kick.”

Nathan Ellis: Bottom-age brother of Corey (17 AFL games for Richmond). “Nathan’s going to be a bit taller than Corey. He’s skilful but he’s more of a developer at the moment so it’s going to take him a bit of time.”

“We’ve got a solid enough contingent of good players who’ll be going to private schools. As you saw last year, it was on for young and old at the start of the season – we nearly beat eventual premier Sandringham when we had a full side available and we beat preliminary finalist Oakleigh in the first round, but then we also had a shocking run with injuries. The start and end of the season – when we have all our players available – will be crucial. Our best side will be good, it’s just a matter of how often we can get the best side on the ground.”

“By and large we’re the same. The major change is Matthew Cape who’s come on as an assistant coach. He’s a local and played really good football for Williamstown in the VFL over a number of years. He’s a very capable all-round sportsperson and is a really good cricketer as well.”