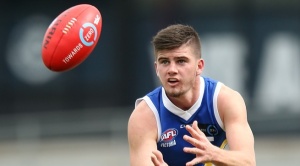 Jaidyn Stephenson (11 games, 23 goals, ave. 14 disposals and six marks in 2016): “Jaidyn’s a really dynamic half forward. He’s powerful, has great speed, a really nice feel for the game and can win a match off his own boot. He’s in the AFL Academy.”

Sam Hayes (16 games, ave. 12 disposals, three marks and 22 hitouts in 2016): “Sam’s a mobile ruckman with a basketball background. He’s got beautiful hands in the ruck and hits to advantage really well. He can also take a mark around the ground and be dangerous when he goes forward. He’s still growing – he’s just hit 204cm – and has a fair way to go in terms of his physical development and ability to cover the ground, but he continues to show improvement every year. He’s an AFL Academy member and was All Australian last year.”

Joel Garner (six games, four goals, ave. 15 disposals, four marks and four tackles in 2016): “Joel’s really strong in terms of his attack over the football, good in the air for his size and dangerous when he goes forward. He’s a real natural footballer. We’ll probably try to push him through the midfield and wing a bit more this year. He’s an amazing leader and person to have around the football club, and he’s just become the first indigenous prefect in the history of Scotch College.”

Tom North (10 games, eight goals, ave. 20 disposals and six tackles in 2016): “Tom’s a strong-bodied midfielder with great power and penetration in his kicking. He would have won our best-and-fairest last year if he didn’t break his ankle halfway through the season – he was leading the count by the length of the Flemington straight. He’s been working really diligently and we’re trying to get him up for Round 1.”

Harrison Nolan (16 games, ave. eight disposals in 2016): “Harrison’s very much in the same key-defensive mould as (Eastern’s 2016 Sydney draftee) Jack Maibaum. He’s really competitive, a great runner for his size and he’s just got a real desire and competitiveness about him. He’ll probably play key back but we may look to get him in the midfield at certain times to offer a different dynamic. He played all his junior footy as a forward before we sent him down back last year and he did a great job.”

Trent Mynott (seven games, five goals, ave. 17 disposals and four tackles in 2016): “Trent’s a beautiful natural footballer with great vision and is really damaging with his possessions by foot. He plays like a Shaun Burgoyne (of Hawthorn), who can have only 10 or 15 disposals but still have a really big influence on the game.”

Jackson Ross (nine games, five goals, ave. 14 disposals in 2016): “Jackson’s a former elite-level tennis player who only really came into the program two years ago. He’s still very raw and skinny but has a really great physical make-up that’s just going to take a bit of time. His athletic ability is very good, so he can play in the midfield, on a wing, at half back or half forward. He’s a real utility in every sense of the word.”

“There’s three boys we’ve found through local football who I think are in it up to their ears in terms of being able to play at the level:

Ryley Stoddart (not on list in 2016): “Ryley’s a real dynamic half forward flanker. He’s got an amazing vertical leap and he’s a real bouncing, energetic type of player.”

Josiah Duncan (not on list in 2016): “Josiah reads the ball really well in flight. He’s a great overhead mark.”

Connor Edwards (not on list in 2016): “Connor didn’t make the cut as a 16-year-old and played some senior local footy last year. He has a willingness to take the game on, run and carry and bounce. He sets the play up from half back.”

Jordan Lynch (pictured - nine games, five goals, ave. 10 disposals in 2016): “Jordan played with injury last year. I’m convinced he’s an AFL footballer, he’s just had no luck with his body. He’s a really powerful, nuggety ball-winner who can then hurt teams with his speed on the outside and the penetration and power of his kicking. He’ll play predominantly through the midfield and also as that dangerous fourth or fifth forward.”

Jasper Rouget (no games in 2016): “Jasper’s been playing senior local footy since he was 15. He’s really competitive, loves getting his hands dirty and a great kick for a kid of 198cm. He just loves the physical contest. He’s still a fair way off in terms of the footy stuff because it’s his first time in, but he could be one to watch.”

Tyler Brown: Top-age son of Gavin (254 AFL games for Collingwood from 1987-2000) and brother of Callum (drafted to Collingwood in 2016). “Tyler’s different to his brother – he’s taller, really good in the air and just has a beautiful feel for the game in terms of his hands at ground level. He has a couple of involvements that are pretty special and catch your eye, it’s just a matter of him getting up to speed with his body and the speed of TAC Cup football.”

“We’re really excited about our top-end in particular this year. We think it’s going to be a very similar season to last year where when we’ve got our best team available, we’re going to be pretty competitive. I’d be disappointed if we didn’t play at least one or two finals – I think that would be the pass mark for us. We’re going to have a fair few private-schoolers though, and I’d also expect eight to ten Vic Metro representatives in that middle part of the year. I’m expecting a pretty successful year, both in terms of the draft and the TAC Cup as well.”

“We’ve had a couple of our assistant coaches move on so we’ve had them replaced internally, which is a credit to our program. We’ve been able to promote some guys from our U16 program. Danny Ryan is one of them – he’s going to look after our midfield. Danny’s a former Eastern Ranges player so he’s gone full circle, and he’s a bit of a local legend in the AFL Yarra Ranges having coached Woori Yallock to three flags and been a really decorated player as well. Jay Cheep has also come on board as one of our U18 development coaches – he’s a former Calder Cannon, Vic Metro representative and Geelong VFL premiership player.”