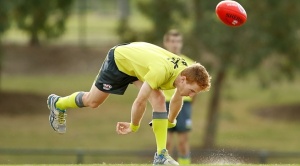 AFL Victoria has made the decision to remove the centre bounce from the TAC Cup competition.

After consultation with talent staff in the regions, the removal of the bounce will be effective immediately, with only ball-ups to feature at TAC Cup level in season 2017.

“The TAC Cup is officiated by field umpires from our Development Squad, with a large number of local umpires promoted to this squad each year from leagues that do not bounce,” Nash said.

“To expect the umpires to learn, practice and improve their bouncing in an elite competition is unreasonable, and we do not want to be in a position to not select talented young umpires for our program purely because they cannot bounce.

“We want to encourage more young umpires from traditional and diverse backgrounds to pursue their umpiring and progress to higher levels without their ability to adequately bounce being a contributing factor.”

Nash said AFL Victoria’s umpiring department will continue to coach and practice the bounce with all of its field umpires at training to prepare them to progress to the VFL Development League, the Peter Jackson VFL and then the AFL.

The decision to remove the bounce at the TAC Cup level was also aimed at helping player development.

“The TAC Cup is an elite development competition where a lot of coaching and resources go into developing tall players to receive an opportunity to play in the AFL system,” Nash said.

“It is therefore beneficial to the clubs and players to have consistent centre ruck contests, and with a large number of recalled bounces in the TAC Cup, it does not enhance an elite free-flowing competition.

“The ability for umpires to develop their skills before having to focus on the bounce will only be beneficial to the umpires and the competition.”