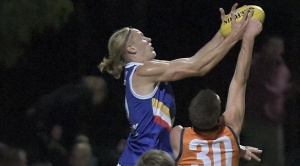 Highly-rated goalkicker Jaidyn Stephenson helped the Eastern Ranges record their first victory for 2017 when the TAC Cup season kicked off on Friday night at Rams Arena.

Stephenson (pictured) kicked four goals in the first term as the Ranges opened up a match-defining 25-point lead over the Calder Cannons by quarter time. The Cannons worked to within 13 points of Eastern during the second stanza but wasted several chances to put the pressure on their opponents in the third, managing only four behinds as the Ranges responded with three majors of their own.

While Stephenson finished with five goals, over-ager Jordan Lynch (two goals) and 2016 All Australian ruckman Sam Hayes were also influential as Eastern ran away to a 54-point win.

On Saturday, the Geelong Falcons posted their 11th straight opening-round win in defeating the GWV Rebels by 82 points at Simonds Stadium.

After an even first quarter, the Falcons exploded with 13 unanswered goals from late in the second term until early in the last to put the Rebels away. David Handley was the biggest star inside 50 for Geelong – booting six majors – while five other Falcons chipped in with two apiece.

Meanwhile, the Murray Bushrangers kept a streak of their own alive, winning a 23rd consecutive match against the Bendigo Pioneers by 51 points at Punt Road Oval.

The streak dates back to 2004 and was continued on Saturday thanks to Murray’s seven-goal-to-one final quarter, which ended Bendigo’s hopes after the Pioneers were within 12 points of the lead at the last change. The experience of over-agers Nick Richards (27 disposals) and Ben Paton (23) was crucial for the victors.

Also on Saturday, the Dandenong Stingrays held off a fast-finishing Gippsland Power outfit to record a 16-point win at Morwell Recreation Reserve.

Led by 30 disposals from AFL Academy midfielder Luke Davies-Uniacke and four goals to Dylan Morris, the Stingrays built a 43-point lead by early in the third quarter. The Power wouldn’t be denied though, pushing their opponents until the final siren.

In the first leg of a Sunday double-header at Ikon Park, 2016 TAC Cup premiers the Sandringham Dragons started the new season as they ended the last, accounting for the Oakleigh Chargers by 55 points.

Wrapping up Round 1 in the second leg of the double-header, the Northern Knights denied a gallant Western Jets outfit by 16 points in an entertaining contest.

After conceding the first five goals of the game, the Jets drew level by three-quarter time only for Knights captain and regular half-back Nick Coffield to go forward and bag three final-term majors (four for the game) to secure the win for his team.