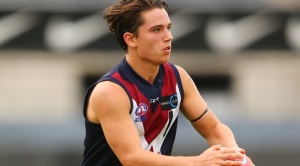 The 2016 TAC Cup premiers have started the new season as they finished the last.

Having claimed their third flag in September and produced five of the first 11 picks at the 2016 NAB AFL Draft in November, the Sandringham Dragons began 2017 with a comprehensive 54-point victory over the Oakleigh Chargers at Ikon Park in Round 1.

During last year’s run to the premiership from fifth on the ladder after the home-and-away season, it was the work of talented midfielders such as Andrew McGrath (AFL Draft pick no.1 to Essendon), Tim Taranto (no.2 to GWS), Will Setterfield (no.5 to GWS), Oliver Florent (no.11 to Sydney) and Corey Lyons (no.71 to Brisbane) who drove the Dragons forward to success.

And on the evidence so far this year, it seems Sandringham has assembled a similarly broad range of on-ball threats.

The Chargers had more disposals and took more marks than the Dragons on Sunday, but the reigning premiers booted nine more goals than their opponents thanks to dominance in the contests.

Sandringham won the clearance count 40-28 on the back of eight players having three or more clearances. In fact, only five of 23 Dragons players didn’t record a clearance.

Their work in winning the ball and driving it forward created opportunities for big men Max King (four contested marks, four goals), Isaac Morrisby (two goals) and Hayden McLean (one goal) to use their height to advantage and capitalise inside 50.

A midfield topped with star talent will take a team a long way – look at Geelong’s 2016 AFL preliminary-final campaign with Joel Selwood and Patrick Dangerfield leading the way.

But midfield depth underneath the top tier will invariably take a team further. Last year’s AFL premiers the Western Bulldogs and their army of quick, brave and skilful on-ballers are evidence of that.

Whether the Dragons have the top-end midfield talent they boasted in 2016 is still to be determined, but their depth of on-ballers has them off to an encouraging start in the premiership defence.

Round 1 keys to victory:

11: Murray Bushrangers over-ager Ben Paton was a constant thorn in the side of the Bendigo Pioneers during his team’s 51-point victory in Round 1. The North Albury junior had a round-high 11 rebound-50s among his 23 disposals, which equated to him personally repelling almost a third of Bendigo’s 36 inside-50 entries for the match.

33: The boot of Jackson Ross (an Old Haileybury junior) was a big reason for the Eastern Ranges recording a +33 advantage in inside-50s (62-29) in a 54-point triumph over the Calder Cannons. The athletic 192cm former elite tennis player unleashed 18 kicks against the Cannons, seven of which drove the Ranges inside 50 – a team high.