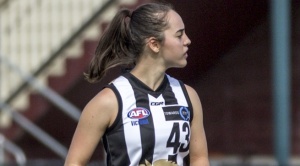 For someone boasting a rich football bloodline, it could be said Chelsea Mitchell has embraced the game surprisingly late in life.

But instead of following her famous family members onto the football field, Chelsea pursued elite-level gymnastics for most of her early life.

After eight years in the sport – and at times training up to 30 hours per week – Mitchell decided it was time for a change. Having only started playing school football last year, she’s now on Oakleigh’s inaugural TAC Cup Girls list and has played in the club’s first two matches for 2017.

“I did elite gymnastics for about eight years,” Mitchell said. “I never really did a ball sport until about Year 9 when I started netball, and now I’m playing footy.

“I injured my elbow (while doing gymnastics) and I just hadn’t been doing anything on it for about a year. I was a bit behind everyone else and it was just getting a bit tough mentally to try and keep up. I did love it but I just started to lose love for the sport.

Mitchell’s determined nature comes out on the football field, with her competitiveness her biggest strength – “I’ll always go for the ball,” she says.

The 170cm midfielder has also been used by Chargers coach Luke O’Shannessy in the back line but said that wherever she played, her immediate focus was on improving her skills.

To that end, it helps having a father who played 221 AFL games from 1984-96 and a brother who last year starred in his 65th and final game for Sydney – the club’s 22-point AFL Grand Final loss to the Western Bulldogs.

Having Tom back in Victoria after he was traded to the Hawks over the off-season helped Chelsea prepare for her TAC Cup Girls debut.

“All summer I was doing work with my brother and dad, trying to improve,” she said. “It was really good to have them around, teaching me the ways of how to play.

“Tom tells me about proper ways of kicking and good strategies like the switch and how to defend. I love having him home.

“I honestly thought the Swans were going to win (the Grand Final). I had it in my head that they were going to win so it was a bit of a shock when they didn’t, but Tom was so good about it. He knows he did his best so that’s all we can really ask from him.”

As she continues her rapid transition to a new sport though, Chelsea might find herself asking a bit more from her accomplished football sibling.