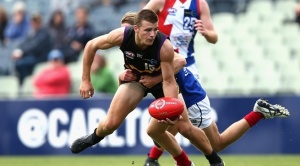 All three teams were preliminary finalists in 2016, with the Falcons and Dragons putting more points on the scoreboard than all other teams so far while the Bushrangers have conceded less than any competition rival.

Last year’s other preliminary finalist the GWV Rebels are yet to record a win in 2017.

Geelong backed up an 82-point defeat of the Rebels in Round 1 with a 77-point victory over the Dandenong Stingrays (1-1) at Simonds Stadium on Saturday.

Leading by a point at quarter time, the Falcons exploded with five unanswered goals in the second term and never looked back. Highly-rated ball-winners James Worpel and Cassidy Parish ran amok through the midfield as Gryan Miers (five goals) and Tom McCartin (three) cashed in up forward.

Later on Saturday at Ikon Park, Murray notched its second win by 24 points in a scrappy contest with the Gippsland Power (0-2).

Only four total goals were kicked in the first half as the Bushrangers went into the main break with a 12-point advantage, but majors to Isaac Wallace (pictured) then David Smith and Jessy Wilson opened up a defining break for Murray in the third quarter, last year’s grand finalist keeping Gippsland to just two behinds for the term.

Sandringham notched a seventh straight victory stretching back to 2016’s final home-and-away round in accounting for the Northern Knights (1-1) by 26 points at Ikon Park on Sunday.

Sebastian Williams booted the opening two goals of the game and then another crucial major to start the final quarter after the Knights hit the lead for the first time in the shadows of the last break. Joel Amartey also bagged two late goals as the Dragons re-established control.

Earlier on Sunday at Ikon Park, the Oakleigh Chargers opened their account for 2017 with a 21-point triumph over the Eastern Ranges (1-1).

The Chargers were humbled by Sandringham in Round 1 but responded with a nine-goal first half – captain Toby Wooller slotting four of them – to quickly put the Ranges under pressure. A goal to Eastern ruckman Sam Hayes to start the final quarter eventually brought his team to within six points of the lead, but answering goals to Oakleigh’s Matthew Day and Jack Higgins proved the sealers.

The Western Jets and Bendigo Pioneers also joined the winners’ list with victories over the Calder Cannons (0-2) and GWV Rebels respectively.

Western’s 31-point win at Rams Arena was driven by big midfield performances from over-ager Judah Dundon and NAB AFL Academy member Lachlan Fogarty, helping the Jets lead the Cannons from start to finish after conceding a big early advantage in a loss to Northern last week.

Meanwhile, Bendigo prevailed by 12 points in a high-scoring contest with the Rebels at Alfredton Recreation Reserve, four goals from Brent Daniels and a powerhouse showing from on-baller Paddy Dow proving influential in the result.