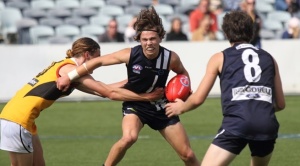 The Geelong Falcons are perched on top of the TAC Cup ladder after two rounds thanks to a potent forward line full of variety.

Last year’s preliminary finalists have put 259 points on the board in their two victories so far – 73 more than any other team. They booted 20.9 (129) in defeating the GWV Rebels by 82 points in Round 1 and last week posted a score of 19.16 (130) to knock off the Dandenong Stingrays by 77 points.

The Falcons have promised so much in recent seasons but failed to produce in the finals. They’ve finished in the top four after the home-and-away rounds in each of the last four years but haven’t made a Grand Final appearance since claiming their second TAC Cup premiership in 2000.

Could Geelong’s 2017 forward line help them take that long-awaited next step?

The Falcons already boast six players to have kicked three or more goals this season, led by Geelong West Giants junior David Handley who booted 6.2 in Round 1 and 1.4 in Round 2. The 181cm half forward is complemented inside 50 by 194cm Torquay forward/ruckman Jordon Reid and 192cm St Joseph’s key forward Tom McCartin, who have both scored five majors this year.

McCartin’s three-goal outing against the Stingrays could have been bigger too, managing only 3.5 from 21 disposals and eight marks. 177cm Grovedale midfielder/forward Gryan Miers – whom Geelong Talent Manager Mick Turner recently compared to Western Bulldogs premiership star Luke Dahlhaus – had his goalkicking radar on though, slotting five straight majors from 23 disposals.

The Falcons forwards have certainly benefited from their midfield teammates’ dominance, but a potent and varied forward line is the envy of most other teams.

The forward group at Adelaide – top-ranked in the AFL for points scored in 2016 – is evidence of that. If talls Taylor Walker and Josh Jenkins don’t get you, mobile forwards Tom Lynch and Mitch McGovern might – or failing that, the dynamic Eddie Betts and Charlie Cameron.

Round 2 keys to victory:

23: The Western Jets recorded an advantage of 23 – more than double the amount of clearances than opponents the Calder Cannons (40 to 17) – in their 31-point win in Round 2. Jets co-captain and Keilor junior Luke Hitch was a key player in the contests, racking up match-highs of 15 contested possessions and nine clearances.

26: In a match decided by only 12 points, 193cm Bendigo Pioneers ruckman Jobee Warde put in an important effort to neutralise the influence of 202cm GWV Rebels powerhouse Lloyd Meek. Despite conceding nine centimetres to his opponent, the Moama junior had 26 hitouts to Meek’s 23 to help the Pioneers to victory.

8: 193cm key forward Toby Wooller exemplified why the Oakleigh Chargers defeated the Eastern Ranges by 21 points. The Chargers lost the clearance count by 15 but consistently won the ball back by laying a round-high 87 tackles. Oakleigh captain and Old Scotch junior Wooller had an equal-team-high eight of them.