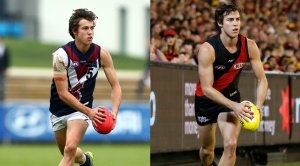 The East Brighton junior had 28 disposals (20 handballs) and four tackles in Essendon’s 65-point loss to Adelaide at Adelaide Oval on Saturday night. He has played all four matches for the Bombers in 2017, averaging 19 disposals, four marks and four tackles per game.

McGrath was selected with pick no.1 in the 2016 NAB AFL Draft after a stellar season at various levels.

He won the TAC Medal for best-on-ground (38 disposals, eight clearances) in Sandringham’s TAC Cup premiership victory and was selected in the TAC Cup Team of the Year after averaging 32 disposals per game in 10 matches for the Dragons.

McGrath co-captained an undefeated Vic Metro team to glory in the NAB AFL U18 Championships alongside the Eastern Ranges’ Jordan Gallucci, averaging 24 disposals per game across four matches to be named an U18 All Australian and joint-winner of Metro’s MVP Award.

He also captained Brighton Grammar to a third consecutive premiership in the Associated Public Schools competition.

McGrath is the first former TAC Cup player to be nominated for the Rising Star in 2017.