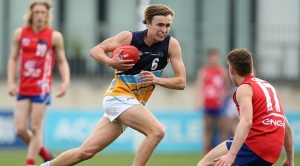 The Bendigo Pioneers have produced some of the most exciting players currently in the AFL, with the likes of Richmond’s Dustin Martin, the Western Bulldogs’ Jake Stringer and Port Adelaide’s Ollie Wines coming through the club’s system.

So too did Geelong captain Joel Selwood and his brother and teammate Scott, and the Selwoods’ Bendigo connection has now helped secure six current Pioneers players the chance to train with the Cats’ VFL team.

The South Mildura product said while the group of six didn’t train with the Pioneers, they still enjoy travelling back home to play with their mates in the TAC Cup of a weekend.

“Thanks to (Talent Manager) Stephen Sharp, (Bendigo head coach) Rick Coburn and the Selwood brothers having that close relationship to Bendigo, we’ve been lucky enough to train with Geelong’s VFL team,” O’Brien said. “It’s unreal. Shane O’Bree is the coach down there and he’s been really helpful and supportive of us.

“It’s good to see the different structures and movements of high-level football players, and being able to train with the bigger bodies gives you a feel for what you’re going to have to expect (at the next level).

“It’s definitely been an eye-opener because the fellas there are very humble and it just shows that even when you get to that level of football, you keep the same head and the same mind and they’re all working for the same goal of finishing first at the end of the year.”

O’Brien averaged 24 disposals per game in five matches for the Pioneers last year, also representing Vic Country in three games at the NAB AFL U18 Championships. In his one TAC Cup match for 2017, he helped Bendigo claim victory with a team-high 26 disposals and two goals against the GWV Rebels, while he also represented the NAB AFL Academy in its loss to the VFL’s Northern Blues at Etihad Stadium in April.

O’Brien has played most of his top-level football as an outside midfielder with a skilful kick and a combination of speed and endurance, but he’s hoping to add a string to his bow this year.

“Some people say I play like (West Coast’s) Andrew Gaff, with a bit of speed and being a left-footer,” O’Brien said. “I’d be pushing myself to say I’d get 35 disposals a game like him though!

“Hopefully I’ll get a bit more size on the body this year and develop more as an inside midfielder. Being a top-ager and playing mostly with people your own age, you get a bit more confidence and hit in a bit harder.

“My main goal for this year is to make the U18 All Australian team after the national carnival, but also to just keep improving, working on my weaknesses and adding different elements to my game like the inside ball.”

Training alongside hard-nuts such as Tom Atkins, Ben Moloney and James Tsitas at Geelong VFL training sessions should get O’Brien quickly up to speed on that front.