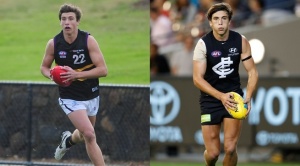 A Benalla junior, 193cm Marchbank had 21 disposals (16 kicks) at 81 per cent efficiency, 10 marks, four inside-50s and three rebound-50s in the Blues’ 19-point victory over Sydney at the MCG on Saturday.

He has played all six matches for Carlton in 2017 – averaging 16 disposals and seven marks per game as a tall intercepting backman – having been traded from GWS after the 2016 season.

Marchbank was originally selected by the Giants with pick no.6 in the 2014 NAB AFL Draft and played seven AFL games in two years at the club.

In his junior career, he earned All Australian honours after representing Vic Country at the NAB AFL U18 Championships.

Marchbank is the second former TAC Cup player to be nominated for the Rising Star in 2017, following ex-Sandringham Dragons and now Essendon midfielder/defender Andrew McGrath in Round 4.