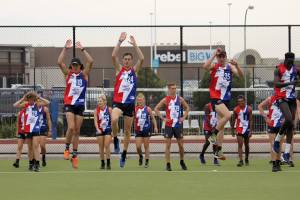 With the introduction of the TAC Cup Girls competition and an eye towards the next AFLW draft, all twelve TAC clubs had five top aged girls attend the day alongside the boys.

Holly Whitford, Darcy Guttridge, Ashley Jans, Georgia Collins and Demi Plunkett had the honour of being the first Gippsland Power Girls to represent the club at the leagues fitness testing day.

It wasn’t all about who could run the fastest and jump the highest though.  The day was split into two components, with a big focus on education.

All players participated in the same educational sessions that are delivered to AFL clubs by the AFL Players Association, covering areas such as Respect and Responsibility and Drug Use.

Under the watchful eye of recruiters from all 18 AFL clubs, players were then put through their paces. Using the same technology and methods as the AFL Draft Combine, they were tested in agility, running and standing vertical jump, the 20m sprint and the endurance challenging beep test.

“We were really pleased with testing day” Leigh Brown said.

“There were some terrific results overall from the boys and the girls.

“As we travelled to Melbourne the day before testing and stayed overnight, it was also a good opportunity for the group to spend some time together as we move closer to the start of the season proper”.

The Power boys will look to use speed to their advantage in season 2017 with a number of the boys testing in the elite range for the 20m sprint. Tall midfielder Will Leslie was the fastest with a scorching 2.88 second run.

Other highlights on the day included a 7.814 second agility test from Callum Porter, and Darcy Guttridge posting an agility time better than a majority of the boys.

In the beep test, Travis Bindley again showed his elite endurance running a 15.6, one of the best results of the day. For the girls, Holly Whitford was also outstanding with a 10.1 beep test.

The Gippsland Power TAC Cup Girls start their season on the 19th of March, with the TAC Cup Under 18 boys and Under 16 boys following a week later on March 25th.