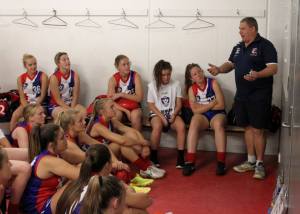 A lot can happen in twelve months.

Since the Gippsland Power Girls team took the field last year the AFL has launched its elite senior women’s competition the AFLW which has become a runaway success.

The elite talent pathway for girls has also had a major boost with AFL Victoria expanding what was the Youth Girl’s competition to a new TAC Cup Girls comp with all twelve TAC Cup clubs now fielding girl’s teams.

It’s an exciting time to be a female footballer, and that excitement is shared by Gippsland Power TAC Cup Girls coach Scott McDougal.

A long term assistant coach with Gippsland Power and the Vic Country Under 18 Boys, McDougal is in his second year of coaching the Power Girls. Spend time with him and you will find that his enthusiasm, positive nature and love of the game is extremely infectious.

His squad has been training hard since November and compared to 2016, Power’s first year in the Girls competition, there has already been a noticeable improvement.

“The skill set has improved, and keeps improving week to week” McDougal said.

During the preseason Gippsland Power became one of the first TAC Cup clubs to train its boys and girls squads together on a regular basis. It’s something that McDougal thinks has had a positive learning effect for both teams.

“It’s been good to have the challenge of something different for the boys too. They have to react and be more conscientious of what is happening around them when they are training.

“It’s not all about them it’s about other people so it increases their ability to work under those parameters”.

McDougal can see that his team is pushing each other harder than last year. The added advantage of this increased fitness has been the girl’s ability to concentrate for longer at training, allowing him to build on the level of detail in his coaching.

He admits that it is hard to judge the improvement in fitness without playing a game, but the results coming from testing have been encouraging.

“We had a lot more even beep test results coming back from the Christmas break this year than what we did last year so I think the programs that are in place are getting them into a good spot”.

With the Gippsland Power Girls season kicking off this weekend, McDougal is looking forward to seeing his team getting better with each game, and most importantly, enjoying their footy.

With new teams in the mix and the increased number of girls from across the state putting their hand up to play at TAC Cup level, It’s hard for McDougal to judge where his team sits in the competition.

“We can’t set a ceiling on them for where they are going to go as we don’t know what the competition is like.

“We are two years into a program where some of the other clubs are into their sixth year, so we don’t really know where we sit”.

What McDougal does know is that he and the support staff at Power have done their best in preparing the girls for the season.

“We really hope the girls show their best on the day. If they do that then the results really don’t matter.

“The key is playing to your potential, getting the most out of yourself and enjoying your footy. That’s what I am looking forward to, seeing the girls do that”.

McDougal believes the success of the AFLW has been a great motivator for the girls with it creating a real buzz in the air at training.

“The girls can see where the future is now.

“it’s alright to talk about it for the last couple of years that you know, potentially this is happening and potentially that is happening, but having it become real and there live on TV has had a big impact”.

Most of the girls have travelled to Melbourne to attended AFLW games.

“They are just loving it”.

The opportunity for the Gippsland Girls to one day become one of those women running out in the AFLW is now there.

It all starts this Sunday when they take the field at Frankston against Calder Cannons.