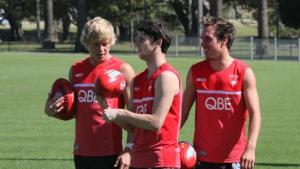 KERRI Leonardis remembers the phone calls like they were yesterday.

Her fourth child Tyrone was born 10 weeks premature on February 22, 1997 and doctors feared more than once he may not survive.

Living in Hurstbridge at the time, Kerri and Tyrone’s father Leo made many a trip into Melbourne’s Mercy Hospital fearing they might have to say goodbye to their newborn son.

“He wasn’t supposed to be here,” Kerri said.

“We got many calls during the night to say ‘You better come, he’s not going to last the night’.

“But he was just a little fighter from the day he was born. There was just something about him. He wouldn’t give up.”

The fighting spirit is one that Tyrone has carried right through to today.

The boy who was not supposed to see out his first few days will next month celebrate his 19th birthday in Sydney, where he is living out his dream of playing AFL football with the Swans.

Even after his release from hospital two months after his birth, Tyrone remained on an apnoea monitor for some time due to heart and breathing problems.

Kerri was on constant watch.

While most children begin to speak at 18 months, Tyrone went to both three-year-old and four-year-old kinder unable to do just that.

It was not until he was almost five that words began flowing out of his mouth.

He started school later than most and repeated Grade 1 because of his learning disability.

Throughout his school years, bullying was a constant, but it was sport which got him through.

“He wasn’t like all the other kids,” Kerri said.

“He couldn’t read and couldn’t spell. He got bullied which was really, really tough. But he did every sport going which helped.”

As a youngster, Tyrone played basketball, tennis and soccer and was regularly seen on a skateboard around the Bundoora home he grew up in.

But it was the last sport he tried that would become the one he loved most.

At age 10, he signed up to play under-11s junior football with Doncaster.

In his first year he was named Player of the Year not just for his own side but the entire junior club.

“I didn’t really know much about football,” Tyrone said.

“I just played a little bit at school but I joined a team and my first year I got third in the league and player of the year at the club so I was pretty happy with that.”

Tyrone’s mind was quickly made up about what he wanted to do when he was older, and that was play AFL football.

“From when he was 10 you would ask him ‘What are you going to do when you grow up?’ and he would say ‘I’m going to play footy’,” Kerri said.

“You would say, ‘No, you’ve got to do something else’. But all his life, all he ever said was he was going to play footy. He had a dream and that was to play football.”

In the face of further bullying throughout high school, Tyrone remained focused on his dream.

He was a goal-setter and continued to tick off what he hoped to achieve each year.

Tyrone Leonardis gets a kick away for Vic Metro during the Under-18 National Championships. Picture: Daniel Wilkins.

He went on to play the rest of his junior football with Bundoora and St Damians before catching the eye of the Northern Knights where he trailed for the under-16 squad but was later cut.

The setback only left Tyrone more determined, though.

He worked harder and made the Knights’ under-18 squad the following year.

But the Knights considered him the “invisible number” on their list until they gave him a chance in Round 9, 2014.

It was only after that game the club was made fully aware of Tyrone’s background.

“It wasn’t until we played him midyear against Dandenong that we saw this kid play and he put his head over the footy and had an impact,” Northern Knights coach Andrew Shakespeare said.

“After the game he had to fill out his player review form and he finally had the courage to come up to me and say ‘I don’t know how to do it’. I said ‘What do you mean?’ and he said ‘I can’t write’.

“We sat down and had a bit of a discussion and he just opened up. I made him realise that wasn’t an extraordinary thing and there are lots of other people in his shoes. So we just adjusted a few things and this kid began to grow.”

Leonardis finished his 17-year-old year playing eight of the Knights’ final nine matches before piecing together a blistering 2015 season coming out of defence which included five matches for Vic Metro at the AFL Under-18 National Championships.

“Across the year he just continued to grow,” Shakespeare said.

“For us we’re always looking for X-Factor and there’s two things clubs just love at the moment — left-foot kicks and guys that can run with the football. He’s got both.”

“If I got picked I knew it was going to be later in the draft. But anywhere I went I was happy,” Tyrone said.

“It’s always been a dream of mine, so for it to actually happen was pretty unreal.”

Over a Christmas break back in Melbourne, Tyrone was still going for runs in 35 degree heat.

He knows his newest goals are going to take some work to achieve.

But it seems nothing is going to get in the way of the little fighter.

“The next goal is just to train really hard the next couple of months and after that hopefully get a NAB Cup game,” he said.

“After that, hopefully I can get one or two games this season. I’m determined to reach that goal.”

Story thanks to Leader Local Footy and News Corporation.