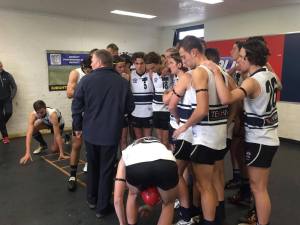 The Sandringham Dragons have used a 7 goal to 3 final term to run away and record a 24 point win over the Northern Knights at Preston City Oval.

The Knights led by 2 points at three quarter time when Anthony Fable kicked the only goal of the third term on the siren.

Harrison Burt was a clear best on ground for the Dragons he finished with 31 disposals and two goals.

While taking the lead in that third quarter, the Knights could have had an even bigger advantage at the end of the term but kicked 1.5 for the quarter. Which coach Andrew Shakespeare addressed after the game, “Our ability to impact the scoreboard is really hurting us, missing opportunities in the third quarter gave the opposition a chance.”

While that was disappointing there was plenty of positives signs for the Knights. “We’ve just got to continue to pick out what we’ve done well, again around the contest we improved, our ability to hunt the opposition has improved.”

But it was a few little things that hurt the Knights in the last term according to the coach “Positive steps forward, but again mentally succumbed in that last quarter and this come backs to changing your mindset, we are a side that has found winning difficult, for 3 quarters we really fought it out hard but when we needed to step up in the last quarter after giving ourselves an opportunity we failed to take it.”

A few players really stepped up today including Sam Binion who had one of his best games in the Knights jumper kicking 4 goals to go with 6 marks and 14 disposals and the coach was full of praise. “Really excited for Sam Binion after missing a whole season of football, to see him grow and develop from week to week and get a performance like that was terrific”


Another who impressed was Anthony Fable, who was really strong through the middle with 16 touches, “Fabes as a 17 year old, really strong, showing the way for everyone, really showing what it takes to play at TAC Cup level, a strong mental application.”

Captain Mason Blakey again had a very strong game in limited game time, finishing with 18 touches, 5 makrs and 3 tackles “Blakes leadership and decision making and his ability to win the football was outstanding.”

Nick Coffield also was very good in the defensive 50 with 18 touches, 5 marks and 3 spoils. “Nick Coffield’s composure and ability as a 17 year old is just terrific.”

The Knights will look to bounce back next week against the Bendigo Pioneers in Bendigo on Saturday.