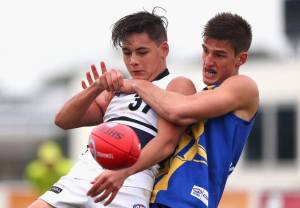 The Northern Knights have used an impressive second half to record their second win for 2016 over the Western Jets.

Coach Andrew Shakespeare says today was a fantastic reward for effort for the boys today. “Really pleased for the boys, the work to get this point has been gradual but we’ve been improving and they really earnt their win today”.

James Hewson was a late call up and played his best game for the Knights kicking 5 goals including 3 in the third term to help the Knights pull away. Coach Shakespare was really impressed “for Hewy to come in and play like that, to set the tone for forward pressure and to get goals as a result was fantastic”

That forward pressure was one of the keys the Knights set before the game and for the boys to follow through on that key point pleased the coach. “We trebled our most forward 50 stoppages in a game today, so they really listened and got reward for it.”


The coach praised his leadership group who lead from the front today, espeiclaly with such a young team today having 11 seventeen year olds in the squad “Our leadership was really instrumental today, we had some generals out there on the field in Mason Blakey, Jamison Shea and Patty Lipinksi whose game in the wet today was simply outstanding.”

Lipinski followed up from his best on ground performance last week with 27 disposals, 3 marks and 5 tackles.

Hewson had 13 disposals to go with his 5 goals, Bobby Lamanna (24 disposals), Corey McKay (23 disposals) and Nick Coffield (21 disposals, 4 tackles and 5 spoils) all impressed for the Knights.

First gamer Clancy Bland had a strong first outing with 10 disposals and 5 marks down back.

The Knights now have the week off for a development weekend before facing Sandringham at Preston City Oval on June 19.