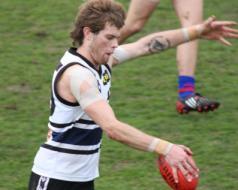 Luke Stanton was the lone Knight to get selected in the 2009 Rookie Draft on Tuesday. Stanton was selected at Pick 22 by Carlton, where he will rejoin 2007 Knights team mate Matthew Kreuzer.

Leading up to the Rookie Draft Stanton (cousin of Nick Dal Santo) had been training with St.Kilda, however the Blues pounced first on the midfielder.

He becomes the ninth former Knights player to ever wind up on a Rookie List. Of the previous eight Andrew Lovett, Ryan Jackson and Jake King all went on to play in the AFL.

The club would like to congratulate Luke on his rookie listing and wish him the best of luck for the future.