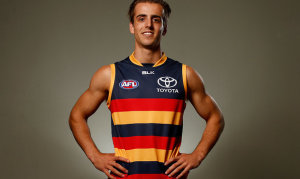 The Eastern Ranges are delighted to have had six players in total taken by AFL Club's during the 2016 AFL Draft period. Five players were taken in the National Draft held in Sydney, while one was picked up via the Rookie Draft.

Jordan Gallucci and Jack Maibaum will both travel interstate being selected by Adelaide and Sydney respectively. Callum Brown was secured by Collingwood as a father-son recruit, while Josh Begley and Dylan Clarke will remain teammates as they join Essendon's list. Nathan Mullenger-McHugh was selected with the Western Bulldog's first Rookie Draft pick. See where all the selected players went and what their new clubs had to say about them.

Gallucci was the first Eastern Ranges player picked at this year’s National Draft, after an outstanding National Combine that including breaking the standing vertical leap record.

What Adelaide said: "We’ve followed him for a long time. He's got speed, power, can play in and out – so that was the attraction, he can play lots of roles. He has played at half-back, he can go forward with his elite vertical … nobody has really ever been better and he's a midfielder, so he can play three areas of the ground which is good" Crows National Recruiting Manager Hamish Ogilvie, AFL.com.au.

Josh has put together an amazing year, having started the season playing for Upper Ferntree Gully in division 3 EFL, broke into the Eastern side in round 4 of the TAC Cup and now finds himself on Essendon’s list.

What Essendon said: Initially overlooked for the Eastern Ranges squad, the powerful forward/midfielder emerged as a surprise packet, winning the TAC Cup club's goalkicking award. Averaged 17 possessions (nine contested) and almost two goals a game in 15 appearances, including 14 goals in his first three outings. A long kick, Begley is particularly good in one-on-one and contested situations, both in the air and on the ground. – essendonfc.com.au

North Melbourne bid on Brown at Pick 35, forcing Collingwood to match their bid for the father-son recruit.

What Collingwood said: Brown is the son of Collingwood 1990 premiership star and former captain Gavin. His improvement has been steady but significant across 2016. Brown played for the Eastern Ranges last year and did some exciting things, including a three-goal haul in the Preliminary Final of the TAC Cup. He's taken his talents into the midfield this season, and become a regular ball-winner. Brown isn't overly quick but moves well and rarely gets caught. He averaged 18 disposals in four games for Vic Metro at the national championships and was named an All Australian. – collingwoodfc.com.au

Sydney will sure up its backline with the U18 All-Australian defender picked by the club with its third overall pick.

What Sydney said: "We wanted to bolster our key position stocks, which is why we took Jack. He can play at both ends of the ground but was named All Australian for Vic Metro this year as a defender, and we're really pleased with the way he goes about it." Kinnear Beatson, sydneyswans.com.au

Dylan joins Eastern teammate Josh Begley at Essendon after being drafted with Pick 63. Clarke will be happy to join his other great mate Andrew McGrath in the side.

What Essendon said: The younger brother of North Melbourne's Ryan, Clarke won All Australian honours after averaging 24 disposals a game during the national championships, with more than half those touches won in contested situations. That's what he does so well: he can get his hands on the ball over and over when others want it, and he is very strong over a contest. Clarke's hands are quick and precise, and he led the championships for clearances, averaging six a game in Metro's division one winning team. Clarke is what you see - a hard-running, endurance beast who finished third in the 3km time trial at the NAB AFL Draft Combine and just racks up the numbers every week. – essendonfc.com.au

The Bulldogs selected Nathan with their first pick in the National Rookie Draft.

What the Western Bulldogs said: Mullenger-McHugh played 15 games at TAC Cup level this year, averaging eight disposals, three marks and three tackles per game. Recruiting Manager Simon Dalrymple said that the 19-year-old can play either end of the ground. “We’re rapt to have Nathan on board. His speed is elite, he’s got a really good vertical leap and he’s a competitor.” – westernbulldogs.com.au